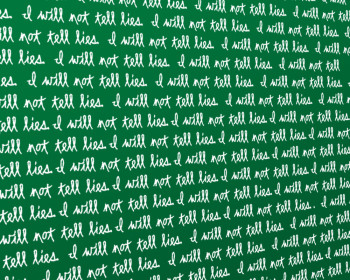 Infamous fabricator Stephen Glass is still trying to make amends for his ethical violations in the 1990s when he worked as a journalist. In recent months, he has written checks for more than $230,000 to compensate for money earned during his journalism career.

Glass spoke at a Duke University journalism ethics class last month, for which he was not paid and for which he covered his own travel costs, the Duke Chronicle reported. Glass said then he had paid about $200,000 back and said “I should have done it earlier.” iMediaEthics contacted Glass for more information.

The breakdown, provided by Glass to iMediaEthics along with canceled checks to the various parties, show Glass paid a total of $234,791.58. “With each payment I included a detailed list of every fabrication that I could identify in my articles,” Glass wrote.

Glass wrote for Harper’s, Policy Review, Rolling Stone, and The New Republic. He donated to Sigma Delta Chi to serve as a payment for the money he was paid by George magazine, which is no longer in existence.

Glass sent iMediaEthics one of the canceled checks he sent to a news outlet.

“In November, I wrote to two former editors of the magazine asking if they had a suggestion as to where repayment should be directed,” Glass e-mailed iMediaEthics. “They did not respond.  In March, I donated the repayment to a journalism charity.  I included a letter with the charitable donation explaining why I was sending the money.”

Sigma Delta Chi board president Robert Leger told iMediaEthics, “We received a check from Mr. Glass in the amount he reported to you. Our staff, following protocol, deposited it. Our board’s spring meeting is this Sunday. We’ll discuss whether to accept the donation and, if we do, whether it should go into our general fund or be used for specific educational programming.”

iMediaEthics reported last year when Glass paid $10,000 to Harper’s. Glass also finally revealed exactly how much of his February 1998 Harper’s article was fabricated. The magazine then published a clarification in its January issue informing readers that about 71% of his story was fake and that it was the first retraction the magazine had ever published.

Giulia Melucci from Harper’s confirmed to iMediaEthics: “Yes, he sent us $10,000 and the clarification was our last communication. I don’t think there’s a big future in our relationship.”

A spokesperson for The New Republic, Amanda Hebert, told iMediaEthics by e-mail it hadn’t received a check from Glass, but that Glass had offered to pay money, which Chris Hughes “declined the offer on behalf of The New Republic.” Glass told iMediaEthics “Mr. Peretz and Mr. Hughes both wrote back indicating the matter should be directed to Mr. Peretz.  As such, I repaid Mr. Peretz.”

iMediaEthics asked the State Bar of California if there was a set amount of money that Glass could pay back to help in his bid to become certified as a lawyer in California. The bar’s communications director Laura Ernde told iMediaEthics “Under the rules, Glass is eligible to reapply for admission. It would be up to the Committee of Bar Examiners to evaluate rehabilitation. Here are the factors the committee considers:http://admissions.calbar.ca.gov/MoralCharacter/Factors.aspx”