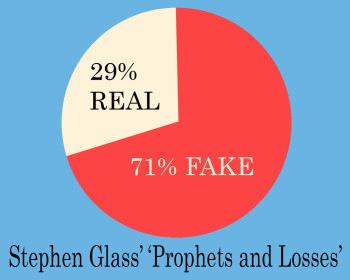 Seventeen years later, notorious fabricator Stephen Glass finally has fessed up to what he faked in his story for Harper’s Magazine, “Prophets and Losses.” It ended up being a whopping 71% of the story.

In a letter published by Harper’s for its January issue, Glass admitted to making up most of his story about phone psychics and pointed out facts and quotes he created for his story. Not only that, Glass said he also “fabricated notes in support of this story.”

“I lied to the staff of Harper’s,” Glass wrote. “I fabricated in interviews about this story. I engaged in egregious misconduct. This story should not be relied upon in any way.”

For the specifics, Glass listed:

In response, Harper’s formally retracted the article but noted it won’t unpublish. Instead, Harper’s added a retraction note to the article.

“Stephen Glass suggests that Harper’s Magazine may not wish to have his misdeeds mentioned in our pages again,” Harper’s wrote. “On the contrary, we welcome the opportunity to correct the record — even almost eighteen years after the fact. Glass’s letter makes clear that at least 5,647 of the 7,902 words of ‘Prophets and Losses’ were based on fabrications.”

“A deception of that scale requires more than a simple enumerating of errors and falsehoods; we must retract the entire article,” Harper’s explained, noting that “this is the first retraction in 165 years of Harper’s Magazine; that we’ve had to do this only once speaks to the excellent work of generations of fact-checkers.”

In October, Glass mailed Harper’s a check for $10,000 to pay the magazine back for the paycheck he received for the piece.

Glass tried last year to be admitted to the bar in California, but was denied because of his past as a fabricator, as iMediaEthics wrote at the time. iMediaEthics has written to the law firm where Glass works for further comment.