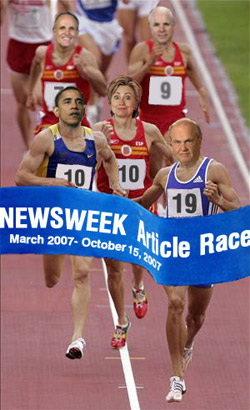 If the number of Newsweek articles were the measure of who will be US President, Fred Thompson has already won.

Even though his campaign only officially started a month ago, on September 5, when he declared his candidacy on the NBC Tonight Show, he has been cast by Newsweek as a serious presidential hopeful in 19 stories, from March 2007 to mid-October 2007 according to our recent study. Hillary and Obama had less coverage, by almost half (10 articles each) during the same time period. Mike Huckabee eked out just one Newsweek report. We further contrasted Thompson’s coverage with other, lesser known, but declared candidates who’ve been running hard in both parties – Dennis Kucinich, say, or Joe Biden, or Bill Richardson – and we were surprised they had gotten zero coverage.

Before delving into our findings, the fundamental ethical principle at stake here needs to be mentioned.Why did Newsweek editors judge Thompson most worthy among all candidates in both parties to receive this favoritism in coverage?

The possible answer lies in the perception, if not the actuality of, a conflict of interest.  Newsweek’s editorial love affair with Fred Thompson may be related to Newsweek’s undisclosed “business partnership” with NBC, Thompson’s employer.

After all, our other study shows that Time Magazine, Newsweek’s competitor, only published 4 stories on Thompson while Newsweek published 19 reports of questionable news value.  Nowhere in any of Newsweek’s coverage do they disclose that Thompson is an NBC employee and that NBC is their partner and, up until this week, host of their MSNBC/MSN website. An informed citizenry needs a “comprehensive” and “proportionate” press

Media ethicists Bill Kovach and Tom Rosenstiel, in their book “The Elements of Journalism,” cite as their “eighth principle” of a free press the need for journalists to “keep the news comprehensive and in proportion.”

Informed citizens need comprehensive and proportional coverage to make good voting decisions. And by most informal measures, we’re a grossly uninformed lot. NBC’s Today Show, for example, recently aired a segment in which random people were shown photographs of various “second-tier” candidates. It all made for good television fun when it was revealed that most of the respondents did not know Dennis Kucinich or Sam Brownback from Adam.