iMediaEthics' Most Popular Stories of 2009

iMediaEthics’s Most Popular Stories of 2009 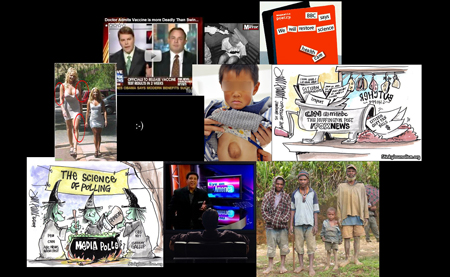 Images from StinkyJournalism's ten most viewed stories of the year.

As the cusp of 2010 approaches, publishers are rolling out their lists of the year’s best, brightest, or even worst stories. Jumping on the bandwagon, we rifled through our iMediaEthics archives to find ten of the year’s most popular posts. Here are the critiques and commentary you readers enjoyed the most: iMediaEthics’ Most Read in 2009:

Fake photography is a perennial favorite on iMediaEthics. This post by Danielle Elliot clued readers in to a long history of image fakery and an earlier photography hoax at the Daily Mirror.

The 2009 spring and fall flu seasons were given over to waves of misleading coverage on H1N1 or “swine flu.” This particularly bad Fox broadcast featured the owner of a hormone replacement clinic portrayed by reporters as an “infectious disease expert.”

Tracking more fake media, Shearer and Elliot discuss a BBC cut and past job on Obama’s Inauguration speech, arguing that the “montage” changed the meaning of the President’s words.

A look at how brain science on the significance of symmetry in visual perception may explain a New York Times photographer’s symmetric photo manipulations.

5.  ABC News’ Exploitation of Medical Conditions?  The Dark Side of “News” as Entertainment
by Rhonda Roland Shearer  (March 10, 2009)

Shearer offers a critique of the use of graphic medical photos in a March ABC News photo gallery, exploring whether the photos–many of common medical conditions of little news value–are exploitative or lurid.

4.  Part I: The Unspoken Peril for “Citizen Journalists”  Surprise! You Owe the IRS Some Gift Tax!
by Rhonda Roland Shearer and Danielle Elliot  (January 13, 2009)

iMediaEthics uncovers a real “hornet’s nest” for citizen journalists, who may be responsible for paying gift taxes on stories they “donate” under a strict interpretation of tax law.

A top-ten within a top-ten, the “Dubious Polling Awards”–courtesy of pollsters George Bishop and David Moore–is a new January tradition at iMediaEthics. Last year’s awards featured “dubious” polling overall winner: the myth that Rudy Giuliani was the early frontrunner for the Republican presidential nomination.

An Exclusive tracking the developments after iMediaEthics began investigating how Greg Gumbel signed on (allegedly unknowingly) to host a series of unlabeled infomercials.

The first in a series of exclusive articles investigating and critiquing Jared Diamond’s April 2008 New Yorker story “Vengeance Is Ours: What can tribal societies tell us about our need to get even?” Diamond has since been sued for $45 million in damages by Daniel Wemp, the main source for the article, who claims Diamond’s piece is untrue and defamatory.

It’s always interesting to see which stories and critiques resonate most with our audience. Photo fakery, medical sensationalism, unlabeled advertising and libel suits seem to be forward in our readers’ minds this year, and you appreciated the Dubious Polling Awards as much as we did. (Look out for next year’s edition coming out  soon.) With that, a toast to 2010, where we hope the majority of journalism will be sharper and more ethical, and our jobs here at iMediaEthicsmuch harder to do.

iMediaEthics’s Most Popular Stories of 2009