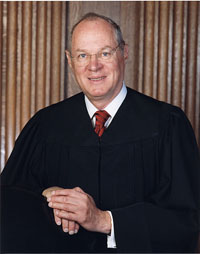 Justice Anthony M. Kennedy, who spoke recently to a group of Dalton high school students but restrained them from writing about his speech in their student paper. (Public domain image courtesy of the U.S. Federal Government)

Last week iMediaEthics questioned the ethics of inviting Jayson Blair, a self-admitted liar and plagiarist to lecture journalism students. But it seems it’s not just professional pariahs who are in danger of teaching young journalists a bad ethical lesson; Supreme Court Justices are now suspect too, according to the New York Times.

On October 28, Supreme Court Justice Anthony M. Kennedy–known for his defenses of free speech, freedom of the press and the first amendment–spoke to the students of Dalton, a New York City private school. But no article on Kennedy’s speech appeared in the next edition of Dalton’s student paper, The Daltonian. “We are not able to cover the recent visit by a Supreme Court justice due to numerous publication constraints,” read a note from the editors.

The Times reports in a November 10 article that the delay was due to a proscription from Justice Kennedy’s staff, who told the editors of the paper that any reporting on the speech had to be run by Kennedy before publication. Essentially, Kennedy’s office demanded prior approval on the article, a request that would be a deal breaker in any professional newsroom.

The issue here is twofold. In an extreme interpretation, this could be construed as Justice Kennedy imposing a prior restraint against The Daltonian. Prior restraint is the censorship of the press by government order from publishing some set of information, and Kennedy is, after all, a member of the U.S. government. Ironically, the Justice has been extremely influential during his career in ruling to limit prior restraint in cases like this one. Yet here he is, in an abstract sense at least, imposing it on a bunch of students, regarding a prepared speech no less.

Of course, Justice Kennedy could have been acting merely as a civilian here, in which case this isn’t a case of prior restraint. It is, however, still an ethical issue, because Kennedy’s request creates an impingement of journalistic independence, itself an important lesson for student journalists. The Society of Professional Journalists advises “Journalists should be free of obligation to any interest other than the public’s right to know.”

A journalist should not allow a source to influence the content of her story, just as they avoid influence from advertisers, partners, or friends. Reporters are often advised to refrain from even letting a source or subject buy them a sandwich, let alone allow their source to view and change the content of a story.

The Times reports that Kathleen Arberg, the court’s public information officer, and Ellen Stein, Dalton’s head of school defended the request as something done for the students’ own good.

Ms. Arberg indicated that what had happened at Dalton was unusual. “Justice Kennedy does not have a general policy for making such requests,” she said. “The request was most likely made by a member of his staff in an effort to be helpful.”

Ellen Stein, Dalton’s head of school, defended the practice in a telephone interview. “This allows student publications to be correct,” she said. “I think fact checking is a good thing.”

But prior approval is not the same as fact checking. According to The New York Times, “The justice’s office received a draft of the proposed article on Monday and returned it to the newspaper the same day with “a couple of minor tweaks… Quotations were ‘tidied up’ to better reflect the meaning the justice had intended to convey.”  Kennedy could have requested, as many sources do, to have Dalton’s reporters read quotes back to him as a fact-checking measure, and the result would have likely been the same. But to require approval on the entire piece goes beyond fact checking and beyond lending a helping hand. Therefore, in categorizing it that way, Kennedy’s office was incorrect.

It seems that because these were students and not older reporters, Kennedy’s office worried about being inaccurately portrayed. But the age of these journalists is no excuse for inducing them, or encouraging them, to break from ethical and independent journalism practices.

Mr. LoMonte said, the request for prepublication review sent the wrong message and failed to appreciate the sophistication of high school seniors.

… “It’s a request that shouldn’t have been made,” he said. “That’s not the teaching of journalism. That’s an exercise in image control.”

New York magazine echoes this, writing that  “a clerk or other Supreme Court staffer should have known better than to try to mess with a student publication and to send that message to young people eager to practice the art of journalism.”

New York concludes the story–perhaps in an attempt to test the tensile strength of Kennedy’s love of the First Amendment, or perhaps to echo the kind of high-school journalism Dalton students were probably not planning on practicing here–with a photoshopped image of Justice Kennedy wearing women’s underwear.