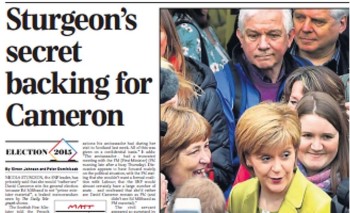 The UK press regulator ruled in favor of Nicola Sturgeon, the First Minister of Scotland, over the Daily Telegraph, which published a story falsely based on a leaked government memo.

The UK Telegraph reported earlier this year on things allegedly said by Sturgeon without verifying the claims with her or her office. So Sturgeon complained  to the UK print regulator the Independent Press Standards Organisation.

Because of the error, the Telegraph must publish in print and online IPSO’s ruling against it. The print publication has to be on page 2 of the paper too.

Sturgeon said in a statement sent to iMediaEthics by her head of communications:

“I welcome today’s unequivocal verdict by IPSO on the Daily Telegraph’s story, which is a victory for effective regulation of the press – and for the truth.

“The complaint was lodged on the basis that the Telegraph’s conduct in producing this story fell short of the expected journalistic standards.

“Subsequent events have proven conclusively that the story was entirely untrue, and today’s ruling simply underlines that.”

“The press have a vital job to do in scrutinising the work of government and of the political process in general. That is a role which is essential for democracy, and it is scrutiny which I welcome.

“But that does not mean that the press themselves are above and beyond scrutiny and oversight. They have a duty to ensure, as far as possible, that the stories they present to readers are fair, balanced and – above all – accurate.

“The Daily Telegraph, in failing to carry out the most elementary of journalistic checks and balances, failed in this case to meet that duty.”

The Daily Telegraph‘s April 4 story, “Sturgeon’s secret backing for Cameron,” was based on “a leaked Government memorandum which claimed to report details of a private meeting between the First Minister, Nicola Sturgeon MSP, and the French Ambassador, Sylvie Bermann, the previous week,” IPSO reported.

The memo was “written by a senior British civil servant” and stated he spoke “on a confidential basis” with the French consul-general about the French Ambassador’s conversation with Sturgeon. The British civil servant wrote that the consul-general claimed that the ambassador said Sturgeon said she didn’t want “a formal coalition with Labour” and “that she’d rather see David Cameron remain as PM (and didn’t see Ed Miliband as PM material).”

What is the significance of that? The Daily Telegraph‘s report explains:

“The disclosure undermines public claims made by Miss Sturgeon this week that she wants to build a ‘progressive’ alliance with Ed Miliband and other left-wing parties to keep the Conservatives out of office.”

“The account’s implications were serious: it suggested that Ms Sturgeon had acted disingenuously by publicly calling for a ‘progressive alliance’ while privately hoping for a Conservative government.”

In the memo, the civil servant noted, “I have to admit that I’m not sure that the FM’s tongue would be quite so loose on that kind of thing in a meeting like that, so it might well be a case of something being lost in translation.”

Sturgeon complained that the Daily Telegraph didn’t contact her for comment before publishing and then denied the claims.  The Telegraph countered that it didn’t have to because “it was entitled to publish an accurate account of the document,” IPSO said.

After the story came out, Sturgeon’s spokesperson called the article false.

“As the First Minister has said, this story – which is based on a UK government document – is categorically, 100 per cent untrue. It must be a belated April fool.

“As Nicola has said on numerous occasions, she wants to see the back of a Tory government which is decisively rejected by the people of Scotland and, unlike Labour, the SNP is the only party that had promised to lock David Cameron out of Downing Street.”

But the Telegraph didn’t publish that denial online until the next day, which it said was “due to human error,” according to IPSO.

Likewise, the French Embassy’s spokesperson told the Telegraph the conversation that the civil servant heard and then wrote about “did not touch on her personal political preferences with regards to the future prime minister.”

IPSO ruled that it was OK for the Telegraph to cover the memo but it should have fact checked, especially since it recounted “at best — a second-hand account given a week later” of Sturgeon’s alleged comments.

“The newspaper was entitled to report on the memorandum, but it was obliged to take care not to mislead readers in doing so, including regarding the status of the allegations it contained,” IPSO wrote, pointing out that the memo writer’s comment about doubting the alleged Sturgeon comments should have raised flags for the paper.

The Daily Telegraph published the IPSO ruling on its website here. When contacted, the Telegraph said it had no comment but pointed iMediaEthics to its publication of the ruling.