"Terrifying Sea Critter" Not So Terrifying After All

“Terrifying Sea Critter” on Reddit Not So Terrifying After All 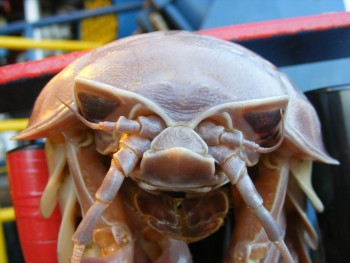 Was a mysterious sea creature found in the deep ocean? Recent sensationalized media and blog coverage of a sea isopod discovered in late March by a sub-sea survey company certainly presents it that way.

On March 27, Ross Gwynn, under the username “Gwynzer,” posted photos of an isopod on Reddit.  Reddit is a community-managed, user-submitted collection of posts that are or could be “new and popular” on the Web. Gwynn asked Reddit readers if anyone knew what the animal was and that he had received the photos via e-mail from an undisclosed location.  Within a couple of days, Fox News was reporting a “Terrifying Sea Creature Hauled from Ocean’s Depths.” See photo gallery.

Gwynn posted on Reddit he had received this in an e-mail:

“I work for a Sub-sea Survey Company, recently this beast came up attached to one of our ROVs. It measures a wee bit over 2.5 feet head to tail, and we expect it latched onto the ROV at roughly 8500ft depth. Unfortunately, the e-mail that these pictures were attached to came from a contractor, and the ship he was operating from (and therefore location) is unknown, so I can’t tell you what part of the Earth this beast was living.

In the post, he attached a couple of photos of the “beast.”

Somehow, news organizations and blogs picked up the Reddit post and soon ran stories of a big bad sea creature. StinkyJournalism wanted to know the back story and contacted Gwynn.  Gwynn told StinkyJournalism that he made the post out of curiousity – he just wanted to know what the pictured creature was.  He never expected any news coverage.

“I simply posted the pictures to Reddit wanting to identify the creature,” Gwynn wrote in an e-mail to StinkyJournalism.  “A few of my work colleagues who also saw the pictures were also curious if it was edible, so I mentioned that in the Reddit article.  It was my first ever submission to Reddit, and I was expecting a quick answer from someone who knew a little about the subject and for the article to go away.”

“When the article made it to the front page, and then it started turning up on major news sites, I was shocked,” Gwynn wrote. “I still can’t believe that a simple question made its way to so many high-profile news sites.”

A major cause for concern though is not just the sensationalized nature of the story, but how news organizations have covered this “story.”  Gwynn informed StinkyJournalism, from among all the news organizations, only UK’s The Daily Mail has contacted him.

Gwynn told StinkyJournalism that “The Daily Mail has been the only ‘News’ service to contact me before using the pictures.  Other media services (more educational based, such as National Geographic) have also contacted me, usually asking for permission to use the images in their galleries or asking for contact details for the person who took the photos.”

Even worse, some of the most basic details in coverage have been incorrect.  First, as Gwynn wrote to StinkyJournalism, media sites are crediting him with taking the photos.  But, as Gwynn wrote in his original post, he received them from someone via e-mail.

One of those sites was Fox News, who not only ran a sensationalized headling “Terrifying Sea Critter Hauled from Ocean’s Depths” accompanied by photos of the isopod (not shown to any scale in some of the photos), but also wrongly reported that it was found with a submarine.

In fact, Fox News’ coverage could lead you to believe a humongous animal resembling a cockroach is swimming around in the ocean. Fox News did accurately  report that the isopod is a Bathynomus giganteus.

The isopod pictured in Gwynn’s Reddit post is definitely on the bigger side; most isopods that have been studied have been about 1 foot in length.  While this isopod might be on the large size at 2 1/2 feet, the average height of a typically not so terrifying 2-year-old baby boy is about the same.

Questioning if the isopod is a “sea monster or giant crustacean” is misleading, considering the animal’s relative size. Likewise, comparing the isopod with a shark seems also to sensationalize the story.  As Yahoo Buzz wrote, “Think sharks are scary? They’re downright cuddly compared to the Bathynomus giganteus, a very terrifying (and very real) sea creature that recently surfaced from the deep.”

As Popular Science reported, “While this 2.5-foot specimen is indeed more monstrous than most of its species, it’s really just a harmless, friendly giant isopod, a sea scavenger that dwells in the deep, cold waters of the oceans.”

This type of isopod lives about 8,500 feet under water, so as The Daily Mail reported, odds are you’ll never encounter it.  And, besides, this one was dead.  Gwynn commented on the original post that “it turns out that the pictures were taken on the West Sirus rig located in the Gulf Of Mexico.”

Tree Hugger wrote that the isopod is edible, and is common in northern Taiwan.

As ExploreEverything.com wrote, “According to a report of IFREMER in 1993, its flesh is edible, good, and interesting taste qualities. Some even compare the taste of his flesh to the crab. The minimum size may represent a commercial interest has been estimated at 21 cm, but the catch and the maximum production of edible flesh is highly irregular, making commercial exploitation of no interest.”

We will be posting more about the news media’s bad habit of freakifying nature for science stories very soon.

“Terrifying Sea Critter” on Reddit Not So Terrifying After All