The Bachmann bandwagon: What the polls really mean

The Bachmann Bandwagon: What the Polls Really Mean 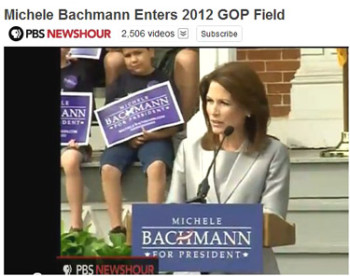 In recent days, Minnesota Congressional Representative Michele Bachmann announced her candidacy for the Republican presidential nomination and received a great deal of positive feedback about her potential electoral strength.

Even before her announcement, the Des Moines Register Iowa Poll had good news for her, reporting she is in a virtual tie with former Massachusetts Gov. Mitt Romney among Iowa’s likely caucus voters.

And two polls, in Oregon and Montana, conducted by Public Policy Polling (PPP) before her announcement, but released the day afterward, showed Bachmann “at the top of the GOP field in both Oregon and Montana when Sarah Palin’s not included.” The PPP report noted that “these numbers speak to the possibility for a two way race between Romney and Bachmann if Palin stays out of the field.”

Whew! That’s quite a send-off for a little-known member of Congress. And it’s only…hmm…six months until the primary season begins. If I remember correctly, it was just a couple of months ago that PPP (among other polling organizations) had businessman Donald Trump as the leading Republican candidate nationally (though at the time I did warn readers of this website that such a conclusion should not be taken as though it were a factual statement).

What should we make of these recent polls showing Bachmann as a leading contender for the GOP nomination?

Well, the most obvious, and least interesting point, is that – of course – it’s way too early to speculate about 2012.

After all, the polls in Iowa conducted in the spring of 2007 had Romney in the lead, followed by Rudy Giuliani, Fred Thompson, John McCain, and Mike Huckabee – a poor fifth place finisher in June, with less than 10% support, but the winner seven months later.

Thus, any speculation now that Bachmann and Romney will be the two remaining contestants for the GOP nomination in 2012 seems mostly whimsical.

Gallup suggests Bachmann is in a strong position to run for president, based on her high recognition and “intensity score” among national Republicans. Despite this supposed strength, all of the national polls, including Gallup’s, taken before her official candidacy announcement, show her with only single digit support. That hardly seems like a “strong” position to be in.

In any case, the important point to remember about the national polls is that there is no national primary. There are state contests, held over a long period of time, starting with Iowa and New Hampshire. The results in the early contests inevitably influence the results in later states. National polls follow what happens in the early contests; they do not predict what happens.

In 2007, Rudy Giuliani led the national polls for most of the year, because of high name recognition. But when the caucuses and primaries actually began, and he didn’t lead or win in any of them, his national numbers also dropped.

So…to get an early look at what might happen in 2012 (even though it’s obviously too early to get really meaningful data!), we need to look at the early state contests.

The poll results in Oregon and Montana are, I would suggest, completely irrelevant. These two states are at the end of the primary season – the Oregon primary is scheduled for mid-May, and the Montana primary in late June (see here). By that time, it’s almost certain the GOP winner will be known. So, it matters not if Bachmann leads in those states now (or even in January). She needs to have won the nomination by the time those states vote.

What voters in Iowa and New Hampshire think, of course, is quite relevant (remembering that they can – and will – change their views between now and the elections). These are the first two contests, and the results there have a major influence on subsequent campaigning.

If we assume that Bachmann wins or does well in Iowa (as the most recent poll suggests), that is not likely – I would argue – to help her win the GOP nomination. So far, at least, the polls show that she appeals mostly to “very” conservative Republicans. Given how conservative the Republican voters in Iowa are, compared with Republicans nationally, it’s understandable why she is doing well in that state. Her appeal seems similar to Huckabee’s in 2008, when he won in Iowa among the voters there, but lost in New Hampshire to McCain and could never catch up after that.

The Suffolk University poll shows Bachmann with just 11% support in New Hampshire. That’s up from 3%, but still far behind Romney’s 32%. For Bachmann to win the GOP nomination, she’ll have to extend her appeal beyond just the very conservative Republicans. And, given her early campaigning, that doesn’t seem likely.

But as I said earlier – it’s way too early to speculate about 2012!

The Bachmann Bandwagon: What the Polls Really Mean