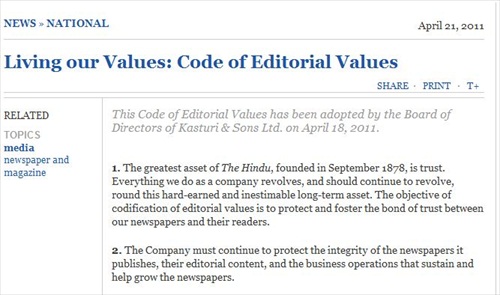 The Hindu has added an editorial values code. (Credit: the Hindu)

Indian newspaper The Hindu has created an editorial values code, San Serif blogged.  But, while the board of directors OK’ed the code, it wasn’t unanimous.

Mondo Times reported, “With daily circulation of 1,272,000, Hindu is one of the largest circulation newspapers in the world [number 34].”

The code calls to “protect” both readers’ trust in the newspaper and “integrity of the newspapers it publishes.”  Some of the newspaper’s “core editorial values” are identified as editorial independence, being fair and truthful, and “commitment to the social good.”