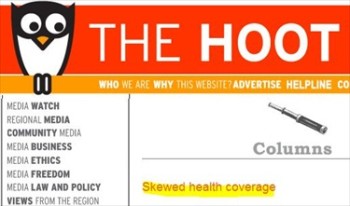 Indian media watchdog site The Hoot criticized “healthcare coverage in the Indian media” in an Oct. 26 column by Kalpana Sharma.

According to Sharma, “a spot check” of top newspapers in India shows that health reporting on India is trend-related and not serving the public.  Newspapers’ health coverage features stories on celebrities with health issues like Steve Jobs, rare diseases, or health issue days like Breast Cancer Day.

However, Sharma questioned why Indian media isn’t focusing on stories on “the diseases that strike and kill thousands of our poor” in India. Specifically, Sharma wanted to know why the media isn’t reporting heavily on the disease Japanese encephalitis.  Sharma argued that a lack of awareness about these diseases is preventing the public from “doing something about it.”