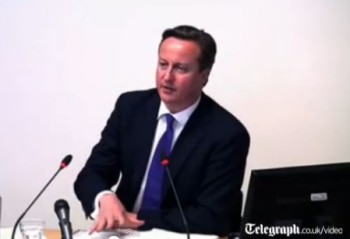 David Cameron testifying at the Levinson Inquiry of the media in 2012. (Credit: YouTube, "telegraphtv," screenshot)

The Guardian published an editorial that claimed former prime minister David Cameron only had experienced “privileged pain,” when his son died.

According to a screenshot of the now-amended article, the editorial read in part, “Cameron has known pain and failure in his life but it has always been limited failure and privileged pain.” The editorial went on to say that Cameron’s experience in the English healthcare system “has been that of the better functioning and better funded parts of the system.”

The Guardian editorial was in response to an excerpt of Cameron’s memoir related to the English healthcare system in the context of Cameron’s experience with his young son’s cerebral palsy and epilepsy, according to the BBC.

A spokesperson for Cameron declined to comment to iMediaEthics. A Guardian spokesperson told iMediaEthics, “The original version of an editorial posted online yesterday fell far short of our standards. It was changed significantly within two hours, and we apologise completely.”

Now, the Guardian has apologized for its comments.

The Guardian‘s editorial, published Sept. 15, now carries a note that admits it “fell far short of our standards.” The note at the bottom of the editorial reads:

“This editorial was amended on 15 September 2019. The original version of this editorial posted online fell far short of our standards. It has now been amended, and we apologise completely.”