The military beat is important , so get your terms right

The military beat is important, so get your terms right 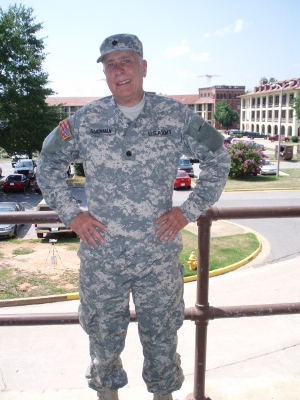 Robert Buckman,Ph,D., is a retired Lt. Col. and Iraq veteran, now working as an associate professor at University of Louisiana at Lafayette and a member of the Society of Professional Journalists Ethics Committee. Buckman's column, The Faux Pas File, appears twice-a-month.

It is one of the most poignant events a journalist can cover: The graveside service of  one of our fallen heroes from Iraq or Afghanistan. It should be covered with sensitivity, respect—and the right terminology.

A recent NPR report on a military funeral was merely the latest of many I have heard or read over the years in which the three volleys of rifle fire at a graveside service were referred to as a “21-gun salute.”

We usually hear real 21-gun salutes at presidential inaugurations and funerals and when Queen Elizabeth or some other head of state arrives in Washington. They are fired with a battery of six 105-mm howitzers.

Both types of salutes are steeped in military tradition. “This practice originated in the old custom of halting the fighting to remove the dead from the battlefield. Once each army had cleared its dead, it would fire three volleys to indicate that the dead had been cared for and that they were ready to go back to the fight. The fact that the firing party consists of seven riflemen, firing three volleys does not constitute a 21-gun salute.”

Cannon salutes originated with the British Navy, and the U.S. Navy adopted the practice, according to the Naval Historical Center. The NHC explains in part:

“In addition to salutes offered to the President and heads of state, it was also a tradition in the U.S. Navy to render a “national salute” on 22 February (Washington’s Birthday) and 4 July (the anniversary of the Declaration of Independence).

“A twenty-one gun salute for the President and heads of state, Washington’s Birthday, and the Fourth of July became the standard in the United States Navy with the issuance of new regulations on 24 May 1842.”
Eventually, landlubbers adopted the practice to honor the president.

The media are not the only culprits. In 2008, I was recalled from Army Reserve retirement to spend a year with the Multi-National Security Transition Command-Iraq in Baghdad. Last Memorial Day, we received a mass e-mail inviting us to attend a service honoring the MNSTC-I personnel who had died in the line of duty. We were told “a 21-gun salute will be fired.” I quickly sent an e-mail back to that Army major, who sheepishly acknowledged the error.

Ignorance of military terminology and weaponry is rife in the media, however.

NPR never acknowledged my e-mailed explanation of the difference between three volleys of rifle fire and a 21-gun salute. Nor did it admit on-air its mistake when I e-mailed the network after its reporter in New York called the USS New York, the new coastal assault vessel built in part with steel salvaged from the World Trade Center, a “battleship.”

I can imagine how Navy vets groaned over that! All four of our remaining real battleships, the Missouri, New Jersey, Iowa and Wisconsin, have been decommissioned and are now floating museums. The Missouri, where the Japanese signed the instruments of surrender in 1945, is at Pearl Harbor. The New Jersey is berthed in Camden, N.J., the Wisconsin in Norfolk, Va., and the Iowa in Vallejo, Calif., in San Francisco Bay.

NPR did, however, acknowledge a correction from a veteran who rightfully took objection when, in the obituary on U.S. Rep. John Murtha, D-PA, the NPR reporter said Murtha had “won” the Bronze Star and Purple Heart in Vietnam.
As the veteran explained, military decorations are not a competition; they are “earned” or “received,” not “won.”
That’s the perfect segue for me to correct another long-standing misnomer. The nation’s highest decoration for valor is the Medal of Honor, not the “Congressional Medal of Honor.” Congress approves all decorations, not just the Medal of Honor.

• I once heard a CNN reporter say “Arlington Memorial Cemetery” instead of Arlington National Cemetery.

• A TV station in the Dallas-Fort Worth area had a super on a story from Fort Hood that said “First Calvary Division.” Spell-check no help there. “Calvary” is where Jesus was crucified. A mounted unit is called “cavalry.” Broadcast people should pronounce it correctly, too.

• Several times I have read or heard “the West Point Military Academy.” It is “the U.S. Military Academy” on first reference, after which we usually add “at West Point” so the audience understands which school is being referred to. Just “West Point” is acceptable on second reference.  Ditto for the U.S. Naval Academy at Annapolis.

• A week or so ago, CNN had a report on the anniversary of West Point’s founding in 1802. The reporter listed some illustrious West Point grads, including Dwight D. Eisenhower, Buzz Aldrin and Colin Powell. Wrong! Powell received a ROTC commission at the then-City College of New York, now CUNY. I e-mailed CNN, and that report disappeared from the Web site, but if the mistake were ever acknowledged, I didn’t hear it.

• Too often I have heard “rocket” and “missile” used interchangeably.  A missile has an internal or external guidance system to home it in to its target. A rocket does not, but is what is referred to as a “fire and forget” weapon.

• I have read or heard a mortar attack referred to as a “bombing,” when it should be called a “shelling.” A mortar is a tube from which an explosive shell is fired at a high angle to land behind enemy fortifications. A “bomb” is either dropped from an aircraft or hidden and exploded manually or by remote control. An improvised explosive device, or IED, can correctly be called a “bomb,” as can suicide bombs carried on a person. A fired mortar shell is not a bomb, but a mortar shell reconfigured into a booby trap could correctly be called a bomb.

• “Marines” are not “soldiers.” Soldiers belong to the Army, sailors to the Navy and airmen to the Air Force. However, AP style states that soldier, sailor and airman are lower-cased, while Marine, Coast Guardsman and National Guardsman are capitalized because those are the same names as the institutions.

• Sergeants and petty officers are not “officers;” they are non-commissioned officers, or NCOs. Second lieutenants and ensigns on up to generals and admirals are officers.

• “Special operations” is a generic term, not the name of an institution, and should be lower-cased. However, the Army’s special ops organizations, the Special Forces (aka the Green Berets) and Rangers, should be capitalized. The Navy’s special ops unit is the Special Warfare Command, which encompasses the SEALs, not Seals (arf arf arf!), which is an acronym for sea, air and land; and the Special Warfare Combatant-Craft Crewmen, or SWCC, pronounced “Swick.” (Don’t ask me why it’s not SWCCC; I dunno.)  The Air Force has Special Tactics Squadrons.

•  The Army has “posts,” the other services have “bases.” So when Maj. Hassan started killing his fellow soldiers at Fort Hood, the post, not base, was sealed off.

•  Not every armored vehicle is a “tank.” The M-1 Abrams is the Army’s main battle tank. The Bradley fighting vehicle and the mine-resistant, ambush-protected (MRAP) vehicle are designed for carrying personnel and are not tanks.

Combat coverage, and the Pentagon beat, are among the most important assignments in journalism, and it does take time for a reporter with no prior military service to learn the ropes (Navy cliché). That said, I have been very impressed with the quality and accuracy of the news coverage I have read on Iraq while I was there and since my return. These correspondents are true professionals who not only get the information right, but risk their lives in obtaining that information. Too many have been killed or wounded in the effort.

Anecdote: Every afternoon in Iraq (morning at the Pentagon), I would look over the Early Bird, the Department of Defense’s daily bulletin board of news articles from a broad array of U.S. and foreign media. Often I would read something that I had not heard or read through official channels. I’d print the article, take it to our J-2, or intelligence officer, and incredulously ask, “Is this true or bullshit?”

Invariably he would read the article, smile and confirm, “It’s true.”

The military beat is important, so get your terms right