This Monkey is not Mitt Romney, Getty Removes Photo Error 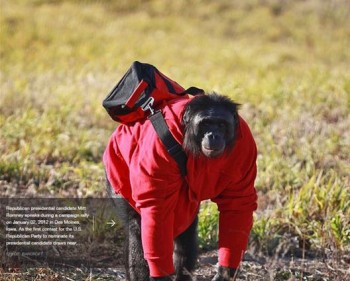 This monkey photo was labeled as Mitt Romney (Credit: Getty via Politico)

Getty Images misidentified a photo of a monkey wearing a red shirt as a picture of Mitt Romney, Politico reported.

The caption for the monkey photo, credited to Xinhua/Landov/Barcroft Media via Getty, reads:

Getty took the photo down after Politico contacted it, Mediaite noted. Politico had come across the photo and incorrect caption recently. In a statement, Getty told Politico “We regret that the wrong caption was inadvertently applied to the photo. The image has been removed from our website.”

This Monkey is not Mitt Romney, Getty Removes Photo Error