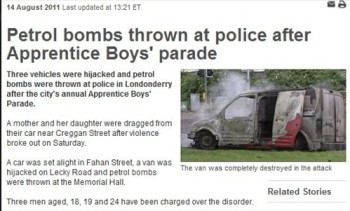 The UK National Union of Journalists criticized the UK police’s order for BBC News, ITN News and UTV News to give its un-aired video from an August Northern Ireland parade, Journalism.co.uk reported.

According to a Dec. 13 BBC News report, the three networks must give “all unbroadcast television footage related to disturbances during the Apprentice Boys parade.”  The court reportedly thinks the tapes could include “relevant evidence” to help police determine who was involved in the “disturbances.”  After the annual parade, “three vehicles were hijacked and petrol bombs were thrown at police,” according to an August 2011 BBC report.

In response, the attorney representing the three networks argued the news outlets would be acting as “evidence gatherers” and “a limb of the state.”

The BBC quoted a spokesperson saying the network was “disappointed” by the decision.

A statement on the National Union of Journalists’ website notes that the group is concerned about the order and that the group’s Irish Secretary, Seamus Dooley, is calling for the news outlets to appeal.

“It is not the function of the media organisation to supply footage to the police. There was a strong police presence in Derry during the parade and the PSNI clearly have material gathered by the police and security forces which could be relied upon. It is difficult to imagine what other material could be in the possession of these media organisations,” Dooley is quoted as saying, adding that the police can review the footage that was aired.”

We wrote in September when the BBC, Sky News and ITN News gave their unaired footage of the August 2011 London riots to police because of a court order.