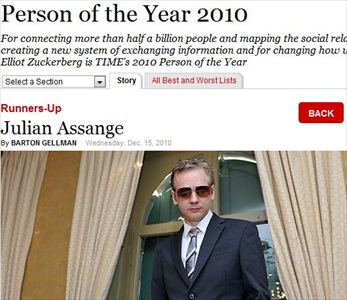 Even though readers selected Julian Assange as TIME magazine’s Person of the Year, Facebook creator Mark Zuckerberg, “who finished 10th in the online poll,”  was selected by the magazine.

According to Yahoo News, Stengel explained that Zuckerberg was chosen over Assange because he thinks Zuckerberg will have more of a long-lasting effect than Assange.

“I think Assange will be a footnote five years from now,” Stengel said.