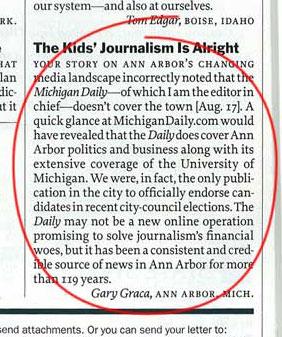 A snippet of Michigan Daily's Gary Graca's letter-to-the-editor originally titled "Correction and response to 'Killing the News to Save It'" is published in TIME Magazine's Inbox--as a letter, not a correction--even though the author specifically cites a factual error.

Student-run newspaper The Michigan Daily grabbed a mention in a Time magazine article titled “Ann Arbor Kills Its Newspaper — To Save It” that ran in last week’s issue [August 17, 2009]. The plug was bittersweet because of an error. Here is the print version.

In the article, reporter Belinda Luscombe chronicles how a college town with no print newspaper has staved off a massive brain drain and managed to stay viable while much of the state is struggling from the recession.

Luscombe clearly hammers away on the dismal fallout after its daily newspaper, The Ann Arbor News, stopped its printing presses on July 23 and then re-launched as Ann Arbor.com the following day. The newly minted portal pared down its staff and is performing as a publishing guinea pig for publishing tycoon S.I. Newhouse’s Advance Publications to see if its leaner and cyber ways can thrive in tough times.

While the article substantively covered the various substitutes that make up Ann Arbor’s news go-tos, including The Ann Arbor Chronicle and the Ann Arbor Observer, it’s the scant mention (and an error) about the longstanding The Michigan Daily that provoked its current editor-in-chief Gary Graca to swiftly draft a letter to the editor to Time. Graca’s letter, titled “Correction and response to ‘Killing the News to Save It,’ ” was published, in part, in this week’s Time Inbox section.

The error in question occurs in the third-to-last graph of Luscombe’s piece where she writes (emphasis mine), “Plus the university has the Michigan Daily, which doesn’t cover the town but keeps an eye on its biggest employer.”

Not only does Graca, who’s an incoming senior majoring in public policy, emphasize that the university doesn’t own or meddle with the coverage of the paper, he’s also disturbed that the attribution to the 119-year-old and going strong periodical (boasting over 200,000 unique visitors to its Web site every month) that he captains is anything but Ann Arbor-centric.

Unaware that a snippet of his letter ran in the national publication until StinkyJournalism.org contacted him by phone, Graca now just wants Time to fix the error.

“What I was more upset about,” said Graca, “Was that they didn’t correct the mistake. I sent the letter to the editor. And right now it [the article] doesn’t have any correction.”

After hitting the Ann Arbor pavement for five days and logging more than 30 interviews, Time’s Luscombe believes her article stands up and graciously fielded several questions over one line about The Daily (as it’s commonly known) in a two-page story she filed.

“Everybody said it’s [The Daily] not a factor. It’s not a player,” Luscombe said.

She further substantiated this claim by describing how she mined for the papers from the day or week but couldn’t locate a Michigan Daily copy.

“The focus of The Daily, as it should be, is the university,” said Luscombe. “That was what people told me. Every single person I spoke to I asked, ‘What about The Michigan Daily? Can it pick up the slack for the the loss of the Ann Arbor News? Everybody I spoke to said it doesn’t have the staff or journalistic expertise.”

“If they cover the town, it’s not with any degree of intensity or regularity,” she added. Ultimately, Luscombe concluded, “They [The Daily] could not stick into that breach.”

“If I had more space I would have liked to fill that out,” she explained.  “Maybe I could have done that better.”

But all this begs Graca’s point. His paper does, in fact, cover Ann Arbor. Luscombe reported that his paper “doesn’t cover the town.” That is why Graca wants and deserves a correction for the error.

Having been made aware of Graca’s gripe, Luscombe expressed her sincerity: “If The Daily feels hard done by this I feel bad for that.”

For Time magazine editors’ part, they did publish a portion the letter Graca submitted via e-mail. Much of the crucial points (not to mention its pivotal title: “Correction and response to ‘Killing the News to Save It.’ “) were omitted. See full text published below.

Luscombe asked Graca to send her a request to update the article and she would go through the proper channels to see about a fix. She told StinkyJournalism that she never read the unedited letter. Could there be a happy ending in the tea leaves? We hope so.

“Correction and response to ‘Killing the News to Save It ‘ “

In Belinda Luscombe’s piece about Ann Arbor’s changing media landscape, it is incorrectly noted that The Michigan Daily – the student-owned (not university-owned, as the piece may have implied) newspaper at the University of Michigan – “doesn’t cover the town but keeps an eye on its biggest employer.”

Students alone manage both the editorial and business side of this operation – as they have since 1890. And as a testament to the quality of work done at The Daily, many of its writers have went on to become some of this country’s most innovative and accomplished journalists, including Dan Okrent, Ann Marie Lipinski, Eugene Robinson, Amy Harmon, Rich Eisen, Lisa Pollak and countless others.

The Daily may not be a new online operation promising to solve journalism’s financial woes, but it has been a consistent and credible source of news in Ann Arbor for more than 119 years. It’s a shame Luscombe didn’t acknowledge that.