Times of London Apologizes for Computer Hacking in 2009 - iMediaEthics

Times of London Apologizes for Computer Hacking in 2009 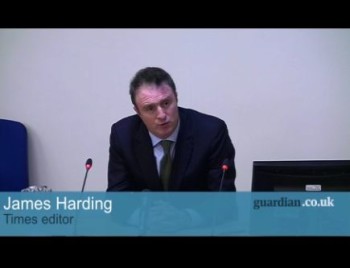 The editor of the UK Times of London during Feb. 7 Leveson Hearing. (Credit: The Guardian video, screenshot)

News Corp-owned the UK Times of London’s editor James Harding apologized Feb. 7 for a Times reporter’s 2009 hacking of an e-mail account, which he called an “intrusion” and “terrible” Journalism.co.uk reported.

We wrote in January when Harding admitted that an unnamed reporter at the Times hacked e-mail for a 2009 story.  Harding didn’t name the reporter or story at the time, but the Guardian suggested Harding was referring to the Times’ report by Patrick Foster identifying “an anonymous police blogger called Nightjack.”  The blogger, Richard Horton, pursued an injunction “to protect his anonymity” but the judge ruled in favor of the Times.

According to Journalism.co.uk, during the Feb. 7 hearing of the Leveson Inquiry into UK press standards, “Emails read out…revealed that a Times journalist, named in court as Patrick Foster, accessed the email account ” of Horton, the Nightjack blogger.  The e-mails also showed that Foster “sought advice from the Times’ legal manager at the time,” Alastair Brett.

Journalism.co.uk reported that Harding said “a great deal of what we now know” about the hacking “has been made available in the last week” and that Harding wouldn’t have let the Times pursue the story if he knew e-mail hacking was involved.

Harding also apologized to UK Justice Eady for not telling the court “the full details about how the story was obtained” back in 2009, when the Times won the injunction case. At that time, the Times “suggested to the court that the blogger’s identity had been obtained via a ‘self-starting journalistic endeavor’ that was largely based on deduction from public sources,” according to the Wall Street Journal.

The Guardian reported that Harding “blamed the paper’s then lawyer, Alastair Brett” for pursuing the injunction case and claimed he wasn’t clued into the Nightjack story or the 2009 injunction case “until after the case had begun.”

According to a Feb. 2 Bloomberg report, when the UK police started investigating the Times of London for computer hacking earlier this month, it marked “the first time the Times has come under police scrutiny” since the phone hacking accusations became widespread last July.

The Atlantic Wire noted that during the hearings on Feb. 7,  “a lot of people took turns apologizing,” including police and the former chairman of print regulator the Press Complaints Commission.

Similarly, in the Associated Press’ story, which the Atlantic Wire linked to, “Apologies all around in UK hacking scandal,” the AP wrote: “They’re all so very sorry.”  The AP explained that the UK police apologized at the hearing for “failing to inform” the “thousands of potential victims” of phone hacking. The police noted that “all the claimants are receiving personal apologies.”

The former PCC chairman, Baroness Peta Buscombe, who resigned in July 2011, apologized for failing to look into the phone hacking scandal, according to the AP.  Buscome said the PCC’s lack of action was because the regulatory body was “misled” and “lied to by Murdoch’s News International.”

Times of London Apologizes for Computer Hacking in 2009