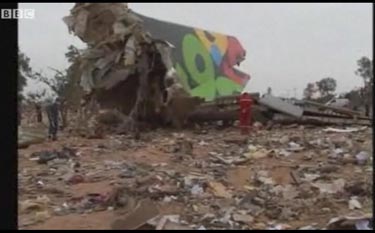 Media coverage of Libyan plane crash has contained some factual errors and speculation by anonymous sources. This screenshot from a BBC video shows the crash site. (Credit: BBC)

The Times Online’s initial May 13 report on the May 12 Libyan plane crash contained both a factual error and an anonymous sourcing – that is, it did until The Times pulled the story, apparently wihout providing readers with a transparent correction.

The American Journalism Review’s Rachel Smolkin wrote in 2006 that “admitting errors is integral to transparency – in Internet time rather than newspaper time.”  The Society of Professional Journalists’s ethics code advises to “admit mistakes and correct them properly.”

The Times Online reports that the plane is an A380.  However, the plane was an A330, as the BBC, CNN international, and RTE correctly reported. Two readers commented on the article to correct it.

Also, the Times Online wrote that “pilots speculated that it could have been the result of human rather than mechanical failure.”

Why doesn’t the Times Online say who the pilots are or how many there were?

Those are all important sourcing questions. Readers shouldn’t ask “how do they know that?” after reading an article.  As is New York Times policy, iMediaEthics’ view is that news organizations should take care to explain why sources are unnamed.  And, anonymous sources should never be used to speculate or attack personally.

A Google search on May 17 at 2 PM EST still showed the above quote about pilots speculating as part of a Times Online article.  The search also shows that the plane is misidentified as an A380.

Interestingly, a search of that quote from the Times Online article turned up not just the dead link to the original story, but also another article by The Independent with the same misinformation.

Christian Science Monitor May 12 did write about possible theories for how the crash happened, but it supported its theories with identified sources.

Other problem areas for journalists in reporting this crash include the identification of the young survivor, illustrating the problems of using anonymous sources.  Jacksonville, Florida TV station WCNT identified the boy as ten years old, as did The Guardian and The New York Post.  The Daily Mail said he’s eight years old.  Yahoo News couldn’t make up its mind, saying he’s nine years old in one article and ten years old in another.

StinkyJournalism has contacted Times Online for more information about the initial story it pulled from the site, and will update with any response.