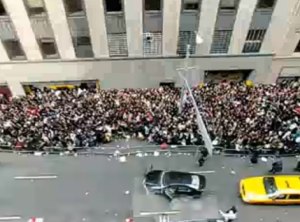 A terrifying riot broke out during last month's cattle call for America's Next Top Model contest. They reported six women were injured. So why did the Daily News use inappropriate labels, such as "sea of under-dressed women" and "hotties in heels;" for the victims of the incident; and then worry later that producers (not them) were not taking these "aspiring models" "seriously"?

All the women did last month was stand in line to enter Tyra Banks’ America’s Next Top Model contest. Panic broke out after a smoking car broke down, and someone yelled “gun.” Hundreds fled, while trampling a reported “six” women in the melee.

StinkyJournalism thought it worth noting the various ways that The New York Daily News’ report referred to women on the riot scene in March (aka, Women’s History Month). Their more recent reports about the second try-outs held on Saturday make an interesting contrast.

Here’s the video of the first audition’s riot. I don’t know about you, but I don’t see any of the “catwalk-craving cuties;” “hotties in heels;” “dolled-up ladies;”  “frazzled women;” “sea of under-dressed women” that the Daily News describes.  I just see a frightening scene where someone could have been killed. Six women were injured the News reported. Still photos show women being loaded into ambulances.

The seriousness of the riot was featured in the Daily News article but it was completely incompatible with the jokey and disrespectful monikers. For example, The NY Daily News said, “Cops arrived and placed barricades along the street. But by that point, there were already several thousand women lined up. A handful of women started fainting after getting pressed up against the wall, witnesses said. ‘Everyone was so compressed, I don’t think they could breathe,’ said Alex Saavedra, 23, who escorted his girlfriend to the audition. ‘Then they started passing out.’ “

NY Daily News’ follow-up reports on the second audition hasn’t abstained from dubious monikers for women either. The names were constrained, however, to “catwalk queens” and “babes” in the Friday news report.

Saturday’s and Sunday’s coverage rolled out descriptors: “wanna-be cat-walker” and “glamour girls” but were dominated by  respectful references, such as : “college student”; “hopefuls” and “aspiring models.”

By Sunday, the Daily News seemed to run out of news pegs, so without a nod of irony became suddenly empathic. They asked, straight faced, whether or not Tyra Bank’s “producers take any of them ( ‘hotties in heels’ to Daily News a month ago and ‘babes’ just on Friday) seriously?”

Perhaps before publishing this question, Daily News editors should have looked at themselves in a make-up mirror?