Tony Blair at Leveson Inquiry: Murdoch has ‘substantial power’ but ‘didn’t lobby me on media stuff’? 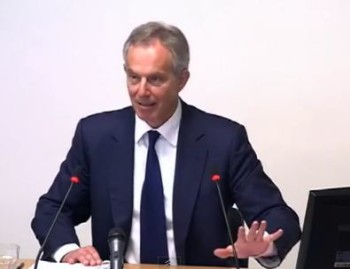 Former UK prime minister Tony Blair appeared at the Leveson Inquiry into press standards and practices today.  According to the Guardian’s live blog, he is “the first former prime minister to give evidence to the inquiry.”

Concerning the relationship between politicians and the press, Blair said that media outlets have the power to “effectively” keep politicians “from getting across your message” to the public and that he “decided as a political leader that I was going to manage that and not confront it,” according to the Guardian’s live blog.

However, he said, “The responsibility mainly is having not confronted this” and called for politicians to “have a very, very solid media operation.”  He indicated that he didn’t address these issues because it would come before the other issues he wanted to deal with.

Blair said that “To put it bluntly, the decision-maker was not Rebekah Brooks in relation to this. It was Rupert Murdoch, for sure.”  He later said that Murdoch has “substantial power.” Also, after questions about “his 1995 trip to Murdoch’s News Corp conference at Hayman Island in Australia,” Blair is quoted as telling the inquiry  “My minimum objective was to try stop them tearing us to pieces. My maximum objective was to try get their support.”

However, he said that Murdoch “didn’t lobby me on media stuff”  He said, according to the UK Independent, “I don’t know a policy that we changed as a result of Rupert Murdoch.”

He added that of Rebekah Brooks, “I did never and would never have asked her or others to conduct attacks on specific individual ”

Also at the inquiry, a man named David Lawley Wakelin shouted  “the man is a war criminal” at  Blair. Wakelin was taken out of the court room, arrested but “later released without charge“. The Guardian posted here a video of the man being removed.  According to ITV News, Leveson said he plans to have “an investigation undertaken” to learn how Wakelin got in the courtroom.

Tony Blair at Leveson Inquiry: Murdoch has ‘substantial power’ but ‘didn’t lobby me on media stuff’?