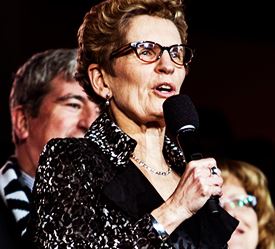 The Toronto Star was “technically correct” but misled readers in some reports on Kathleen Wynne, the head of the Ontario Leader Party and Ontario’s Premier, public editor Kathy English reported this month.

English pointed to three news reports describing Wynne’s background as “a former mediator who studied at Harvard University” someone who had “gone to Harvard” and a “Harvard-educated former minister of education.”

But, Wynne was only at Harvard for “a week-long mediation training course” — and not for a degree program.  While English noted that neither Wynne nor the Star said “she has a Harvard degree,” some readers could have — and did — misread the Star‘s reporting that she did.

English said that Star freelance columnist Judith Timson first included Wynne’s time at Harvard in a story by saying Wynne had “gone to Harvard,” based on a quick look at Wynne’s campaign website.

Even though English blogged to clarify the misleading impression the newspaper’s reporting may have given readers, none of the three Toronto Star articles she mentioned carry clarifications or corrections to fix the “overstated” description of Wynne’s background. iMediaEthics is writing to English to ask why and will update with any response.