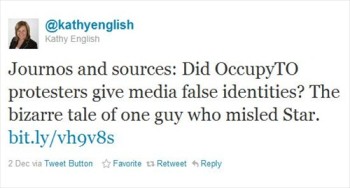 Toronto Star public editor Kathy English told readers in a Dec. 2 column about one of its sources using a pseudonym. (Credit: Twitter, screenshot)

Toronto Star public editor Kathy English highlighted an interesting case of a source being identified by a pseudonym and how the newspaper usually handles pseudonyms.

In her Dec. 2 column, English questioned why the newspaper didn’t tell readers that an Occupy Toronto spokesperson much quoted and even photographed in Star news stories recently was using a pseudonym. The man went by and told reporters his name is Antonin Smith, but it’s not his real name, according to English

In this instance, the Star’s reporters apparently didn’t realize at first that he was using a pseudonym.  English explained that the man thought “there was an implicit understanding that he would be identified by this pseudonym” going forward.  While Smith originally told Star reporters his name was Antonin Smith, he later told told a Star reporter that it was a pseudonym.  Readers also contacted English to tell her Smith went by other names, after readers saw a front-page photo of him in the newspaper.

English noted that the newspaper’s policy only allows the use of pseudonyms in rare instances, when a managing editor gives the OK and if the use of a pseudonym is disclosed to readers.

We wrote to English to ask how the Star will handle identifying Smith moving forward. She told us by e-mail that

“It’s not my call to determine how Antonin Smith is named in future but I would expect the Star’s policies would be followed here.

“That means: A) If he seeks to be identified by a pseudonym, reporters must discuss this with Star editors who have authority to make this call, B)  If he is referred to as Antonin Smith, readers must be told that is a pseudonym.”

She added that  “I’ve been thinking about the early stories online and I think transparency demands we  need to append a note to each now to indicate that Antonin Smith is a pseudonym.  We will be trying to get that done this week.”