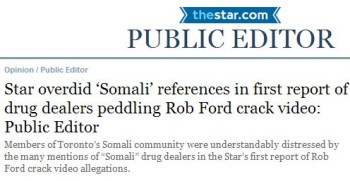 In the Toronto Star’s report about the alleged video of Toronto mayor Rob Ford smoking crack that was offered at a price to the Star and Gawker, the Star described the people selling the video as Somali “11 times in the article, exactly as many times as the word ‘crack,'” Somali advocate Abdi Aidid complained to the Star’s public editor Kathy English.

“Is it so salient a fact that it warrants mention as often as the drug in question?” English said Aidid, a “member of a Toronto District School Board task force aimed at curbing the dropout rate for Somali students,” asked.

The Toronto Star story identified the sellers of the video as “a group of Somali men involved in the drug trade.”

English defended the inclusion of the description of the men because “the fact that the men described themselves as part of the Somali community is relevant to the responsible reporting of this story.” English explained the newspaper had to prove it had “done its due diligence’ in reporting such serious allegations.  “Given that these men are unidentified sources making serious allegations and peddling strong visual evidence of Ford apparently smoking crack, it was important that the Star give readers as much information as it can at this point about who these people are and what their motivation might be,” she explained.

iMediaEthics agrees that it’s necessary to describe as best possible the source of the video — just as a news outlet should describe an anonymous source — because readers would want to know information about who was selling the video in order to judge whether the video is authentic, or a hoax, or even a ploy created by political enemies of Ford’s. In this situation, since the video wasn’t shown to readers, readers truly have to decide whether to take the word of the reporters or not, so the Star had to provide as much information as possible without identifying its sources. That said, including the ethnicity of the drug dealers 11 times is excessive.

English said Aidid’s point was fair and that the “reporters and editors involved” agreed the first story on the video “included too many references” to the Somali background of the video owners and that after that first story, “the Star rightly pulled back significantly from reporting the drug dealers’ background.”

For example, Star managing editor Jane Davenport told English that “the first version of the story used ‘Somali’ too heavily” and apologized to the Somali “community.”

The Star also edited the story with 11 Somali references to cut “half of the ‘Somali’ references,” English wrote, somewhat excusing the numerous mentions to the fact the newspaper had to get the story out as soon as possible.   As iMediaEthics has previously written, Gawker broke the story earlier this month, and shortly after the Star released its own story, saying it had seen the video and known about it for weeks.

When iMediaEthics looked at the story May 28, it had six uses of the word “Somali.”

In an email to iMediaEthics, Aidid questioned why the ethnicity of the video sellers was even mentioned and said that it wasn’t the number of references to Somali but the inclusion of it. Aidid wrote:

“I think The Star did well to acknowledge some problems and open up a conversation, but I think an opportunity for a truly productive discussion was lost,” Aidid wrote.  “Mrs. English’s response focused primarily on how often the word Somali was mentioned. People are not upset by the frequency of mention as much as they are by the fact there was mention at all.”

Aidid argued that the ethnicity was of no relevance to the story.  “Free-floating ethnic identifiers don’t contribute to our knowledge of the events, they only serve to unfairly associate particular communities with illicit crime,” Aidid wrote.  “The Star needed to recognize that the barriers the Somali community faces are, in large part, created and sustained by negative news media portrayals.”  Further, Aidid pointed out the The Star is still identifying the video owners as Somali regardless of English’s column. He wrote:

“Why do they only bring up the unnamed source’s ethnic background when there are behavioral indiscretions involved? The implication is that being Somali is more or less inextricable from drug dealing. I fail to see how it’s relevant to the story at all.

“Also, the label ‘Somali’ should be subject to further interrogation. Why are they not Canadian? Would they be called Canadians if they were attached to a more positive story?”