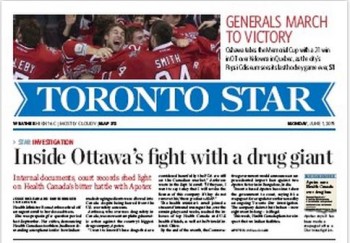 The term, which English noted originated in the 1980 presidential primaries, was used recently in a Toronto Star editorial and prompted some complaints.

University of Windsor associate professor Richard Douglass-Chin argued that the term is a “dismissive and racist misnomer,” English wrote. M. NourbeSe Philip explained that voodoo is a “derogatory, racist term for a complex spirirtual and social practice which is misunderstood by Westerners.” The term doesn’t just insult the Vodun religion but also its people, Philip wrote.

English agreed that it’s an unnecessary term but said she didn’t think it was used out of racism. “I certainly don’t think there was any ‘racist’ intent in the Star’s use of this phrase,” she wrote. “For better or worse, this is an issue to which no one here seems to have given any prior thought and there was no understanding of the possibility of causing offence.”

Moving forward the Star won’t plan to use the term, but it also won’t issue “a complete ban” because interviewees may use it.