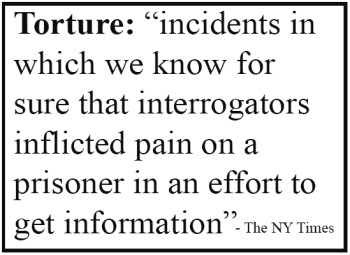 The New York Times will start using the word “torture” when reporting on “incidents in which we know for sure that interrogators inflicted pain on a prisoner in an effort to get information,” Times executive editor Dean Baquet reported Aug. 7.

Baquet said the newsroom has discussed the use of the word torture when characterizing ‘the CIA’s brutal questioning of terrorism suspects.”

The definition Baquet said it is using when it uses the word “torture” is ” the intentional infliction of pain to make someone talk.”

The Guardian, which reported on Baquet’s announcement, also disclosed its own practices:

“The Guardian does not have specific guidelines with regard to the use of the word, but nearly always prioritizes its common meaning – which Baquet concisely defines as when ‘interrogators [inflict] pain on a prisoner in an effort to gain information’ – surrounded by context to make attendant details and issues as clear as possible.”

“We tortured some folks,” he said, according to Politico. He added, “When we engaged in some of these enhanced interrogation techniques, techniques that I believe and I think any fair-minded person would believe were torture, we crossed a line. And that needs to be understood and accepted.”

In 2010, a study by Harvard’s Joan Shorenstein Center on the Press, Politics and Public Policy reported that the New York Times, along with the Los Angeles Times, Wall Street Journal and USA Today, stopped using the word “torture” to describe waterboarding in 2004, as iMediaEthics previously reported.

At the time, the New York Times didn’t have a policy on when it was acceptable to use the word “torture.” Standards editor Phil Corbett explained that “In general, when writing about disputed, contentious and politically loaded topics, we try to be precise, accurate and as neutral as possible; factual descriptions are often better than shorthand labels.”

New York Times executive editor at the time Bill Keller said “We describe the practice vividly, and we point out that it is denounced by international covenants and human rights advocates as a form of torture.”