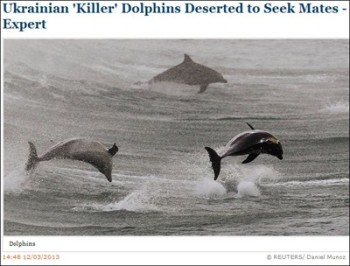 Ria Novosti later added a note about the story being accused of being a hoax. (Credit: Ria Novosti, screenshot)

News outlets, including Russian news agency Ria Novosti and later the Huffington Post and The Atlantic, were hoaxed by a phony story claiming that armed dolphins with “firearms attached to their heads” were on the run. The story claimed that “three of the Ukrainian navy’s ‘killer’ dolphins that swam away from their handlers during training exercises probably left to look for mates.”

But, as Radio Free Europe Radio Liberty explained, the Ukrainian Defense Ministry called the story a “fabrication.”  Most of the news stories that fell for the hoax story, from what iMediaEthics has gathered, relied on Ria Novosti‘s initial story or “dolphin science guy” Justin Gregg’s blog.  And in its initial report, Ria Novosti noted itself that the ministry “denied the reports.”

“The initial reports of the escape came from Ukrainian media, which, as you probably already know, reproduced an internal memo supposedly written by the head of the military research institute to naval command and allegedly given to the media by an institute employee who asked to remain anonymous. If this was a hoax, as the ministry argues (pretty convincingly, in my personal opinion), then it was the Ukrainian media who got hoaxed. For RIA Novosti as an institution, this story may serve as a cautionary tale to be more thorough in double-checking reports by particular media outlets.”

Yefimova-Trilling said that Ria Novosti would be adding a note to its original article about the claims the story is a hoax.  She added that the original article did include the ministry’s denials of the story.

“One of the English-desk reporters has spoken to Ukraine’s Defense Ministry herself and is writing a new story today; it will be up relatively soon and I’d be happy to send you the link. The decision to write it was not based on the belief that we were hoaxed, but on the level of detail in the latest explanation from the Ukrainian military (I can tell you more about that, if you’d like). Particularly because the story got so much play in widely read English-language media, we feel it’s important to set the record straight. We are adding a nota bene to the original story.”

That note which was added to the initial report, reads:

“NB: New details provided by Ukraine’s Defense Ministry give compelling reasons to suspect that the initial Ukrainian media reports about the dolphin escape were based on a hoax. A new story will appear shortly. Check back for the link.”

Ria Novosti’s initial story also was corrected to add distancing language in light of the hoax claims.  In its March 14 follow-up story, Ria Novosti reported at length that the ministry “vehemently denied” the claims and called it a hoax.  Ria Novosti also explained in its report several reasons to believe that the document that the story was based on was a hoax. For example, according to Ria Novosti, the document “was not on letterhead and had no ink stamp,” the person “whose name” was on it said it was forged, and it was sent on a Sunday, among other concerns. The ministry also denied the document was legit.

The apology by The Atlantic for  the “mistake” in reporting on a hoax reads in part:

“Update! Sad news, friends. It turns out that one piece of the Ukrainian dolphin story is, in fact, a hoax. No dolphins from the Ukrainian army’s complement have actually escaped, according to this newspaper report. … The strangest thing about this is how plausible the whole thing actually is.”

The Atlantic’s original article cited Gregg’s blogpost “Killer Ukrainian dolphins on the loose.”  Gregg’s March 12 post has also since been updated to reflect that Ria Novosti’s report “was based on false information.”

In a follow-up blogpost, Gregg noted that the hoax had spread online but tried to distance himself from the hoax, writing:

“It’s important to point out though that I had nothing to do with this story other than to re-post the information I found on the Russian news agency RIA Novosti’s website with added humor.”

For fun, Gregg also included a few Photoshopped pictures of dolphins with weapons.

While The Atlantic and Gregg both admitted to being hoaxed, several media outlets haven’t corrected their stories as of last night. For example:

The Huffington Post, UPI, the Daily News and USA Today all based their reports on Ria Novosti’s story.

UPDATE: 3/16/2013 3:15 PM EST After publication, Ria Novosti told iMediaEthics that its examination of the document — not the ministry’s — found that it had no letterhead and no ink stamp. iMediaEthics has clarified text above to reflect.