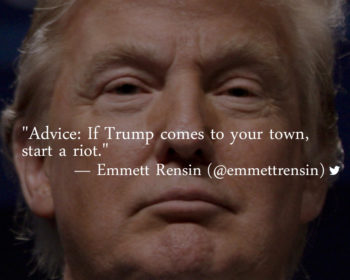 Pinned to the top of Rensin’s Twitter feed is his May 14 blogpost calling violence “categorically immoral.”

Advice: If Trump comes to your town, start a riot.

It's very simple: All violence against human lives and bodies is categorically immoral.
Property destruction is vastly more negotiable.

And listen: I do tend to agree Trump is atypically threatening. That's why I'm not going to condemn rioters.

Again: You cannot tell people over and over that somebody is an existential threat to them and then be appalled when they act like it.

In a June 3 statement, Vox said Rensin’s tweets “cross a line” and Vox doesn’t “condone” his call for rioting.

“On Thursday night, Emmett Rensin, the deputy editor of Vox’s first person section, sent a series of tweets that, among other things, urged people to riot if Donald Trump comes to their town.

“We at Vox do not take institutional positions on most questions, and we encourage our writers to debate and disagree. But direct encouragement of riots crosses a line between expressing a contrary opinion and directly encouraging dangerous, illegal activity. We welcome a variety of viewpoints, but we do not condone writing that could put others in danger.

“In this case, Emmett’s tweets violated Vox’s standards and Emmett has been suspended as a consequence.”

Mediaite reported Friday, “Earlier today, there was much discussion surrounding founder Ezra Klein keeping his mouth shut about the entire Twitter incident, but now, that silence has been broken.”