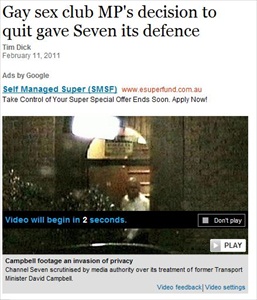 Recent ACMA ruling suggests that if a politician had not quit, AU Channel Seven, would have been ruled against for invading the man's privacy. (Credit: Screenshot from Sydney Morning Herald)

iMediaEthics wrote in May about the controversy when broadcast station Channel Seven outed Campbell, who had been seen leaving a male sex business. Campbell resigned just before the station aired its report; the station had asked Campbell for comment.

At the time, the media debated whether the report was in the public interest or for the public’s entertainment at a man’s expense of personal privacy.  Campbell had presented himself as a “family man” and had used a taxpayer-funded car to drive to the sex business.

ACMA concluded in its recent investigation into Channel Seven’s report that the network “did not breach privacy provisions of the Commercial Television Industry Code of Practice,” according to ABC.net.au. However, the ACMA did state that the network violated Campbell’s privacy.

According to the Sydney Morning Herald, ACMA didn’t agree with the defenses of Campbell as a family man, but did believe that the report had “merit” only because the public would want to know why he resigned. The key finding was: since Campbell resigned in light of the scandal, the public had the right to learn why he quit. The Herald reported (emphasis ours):

“When the former NSW transport minister David Campbell learnt Seven News planned to run footage of him leaving a gay sex club, he quit. But his decision to resign the ministry has emerged as the sole reason Seven escaped censure by the broadcasting regulator for invading his privacy.”

The Herald added that ACMA chairman Chris Chapman stated in the report that: “The analysis of the issues raised by the broadcast required a careful consideration of the rights Mr Campbell had to his privacy, as well as the public interest in understanding the reasons for his resignation,”

Chapman went on to say  “but broadcasters cannot simply invoke blandly asserted public interest justifications for flagrant privacy breaches.” He continued: “The Authority regards invasions of personal privacy as very serious matters and specifically noted that public figures, including politicians, remain as entitled to have their privacy respected under the code as ordinary citizens.”

Chapman summarized the conclusion:  “In this case, the resignation of the minister meant that the broadcast, which would otherwise have been an invasion of privacy, was justified, but solely because it provided a deeper explanation of the circumstances behind the resignation.”

According to the ACMA, it investigated because of two complaints by the public (neither from Campbell). See the ACMA report here.

IMediaEthics is writing to ACMA’s media manager, Emma Rossi, and will update with any response.