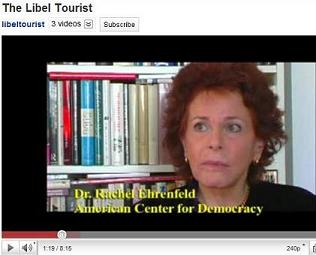 Dr. Rachel Ehrenfeld, pictured in this screenshot from an interview posted on YouTube, is an advocate for the SPEECH Act, which would make void some foreign libel rulings. She was sued for libel in the UK in 2004.

Because Britain’s libel laws are more friendly to the public than the media, American-based media outlets and writers sometimes find themselves sued for libel in Britain.

But, a bill introduced by the U.S. Senate Judiciary Committee June 22 might make some foreign defamation rulings unrecognizable in the U.S., RTT News reports.

Senators Patrick Leahy (D-VT) and Jeff Sessions (R-AL) introduced the bill, which would protect U.S. journalists from lax libel laws abroad.  If the foreign ruling wouldn’t hold up in U.S. court, then the ruling wouldn’t be upheld in the U.S.

The legislation, “The Securing the Protection of Our Enduring and Established Constitutional Heritage” or SPEECH Act, is backed by Leahy and Sessions.

“This bipartisan legislation guarantees that a foreign defamation judgment cannot be enforced in the United States if that country’s libel standards are inconsistent with American law,” Sen. Leahy said in a statement on his Web site.

Similar legislation is already enacted in a handful of states, including New York.

Protection from foreign defamation rulings became a national cause largely because of Dr. Rachel Ehrenfeld, an author and a director at the American Center for Democracy. Ehrenfeld lost a libel suit in the UK in 2004.

She wrote in the May 28 of Newsweek about that experience.

She had written a book, Funding Evil, “which identified networks of criminals, billionaires, and state leaders who underwrite terrorism and political violence.”

The New York-based author wrote that she was sued by Saudi billionaire Khalid bin Mahfouz for her writing in that book on his “links to Al Qaeda, Hamas, and other radical Muslim organizations.”

She wrote in Newsweek that she was sued in London because 23 copies of her book were bought in England and a chapter of the book was available online via ABC News.

As Ehrenfeld noted, libel lawsuits are different in the U.K. because in the U.S. the plaintiff must prove statements false and intent of harm, where UK libel law requires defendents to prove truth.

She wrote that she has “refused to obey” the court’s order to “destroy all copies” of the book.

In a statement on the American Center for Democracy Web site, Ehrenfeld wrote that the bill “marks a critical victory in the fight for free speech and the advancement of our national security.”

“Without the SPEECH Act, American writers, publishers, and Internet users, will continue to face an imminent threat of the enforcement of foreign libel suit when reporting on matters of public interest, including science, national security, health and personal safety. With Congress’ action, other nations will no longer have a green light to attempt to silence American critics,” said Dr. Ehrenfeld.

The news release on Leahy’s Web site noted that the committee “is scheduled to consider the legislation at a business meeting on Thursday.”