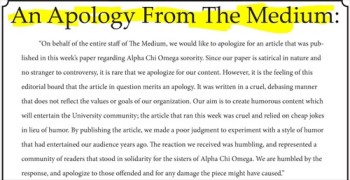 Rutgers University “satirical fake news” paper The Medium apologized Feb. 27 for an article “written in a cruel, debasing manner that does not reflect the values or goals of our organization.”

The article’s headline,”Alpha Chi Omega to Shut Down,” tied in real news as reported by Rutgers student newspaper The Daily Targum — that the sorority’s Rutgers chapter is in fact closing.  But, the story, by “Satanic Yoda,” called the school’s chapter members of Alpha Chi Omega “ugly b*tches” and said that the only pledges for the spring were “a measly three wildebeests and an elephant.”

The article further characterized the chapter’s president as being interviewed “in between large spoonfuls of chocolate ice cream” and the sorority members as eating “estrogen-injected animal feed” served in a “feeding trough.”

The Medium’s apology, which is featured on the paper’s homepage and Facebook, reads in part:

“Our aim is to create humorous content which will entertain the University community; the article that ran this week was cruel and relied on cheap jokes in lieu of humor. By publishing the article, we made a poor judgment to experiment with a style of humor that had entertained our audience years ago. The reaction we received was humbling, and represented a community of readers that stood in solidarity for the sisters of Alpha Chi Omega.”

In an editorial, Rutgers University’s student newspaper The Daily Targum criticized The Medium not just for the article but also for bowing to criticism. The Targum added that the article’s timing was also bad as it was National Eating Disorders Week.

The Targum commented “Tsk, tsk, tsk. You dropped the ball on this one, Medium” for doing “the journalistic unthinkable” with its “offensive,” “distasteful, derogatory and sexist” article.   Further, The Targum called out The Medium for apologizing, writing:

“The Medium is meant to indiscriminately offend — trust us, we’ve borne the brunt of it. If one of us has to take it, we all have to take it. No one is supposed to get special treatment, and The Medium totally punked out under the slightest pressure of intimidation. Frankly, we’re disappointed.”

“At this point in time we are working on moving past the article and the publicity it has brought to our chapter. We did not ask The Medium to apologize but we certainly appreciate the gesture. The editorial staff at The Medium indicated in their apology that the article was ‘written in a cruel and debasing manner’ and that it ‘relied on cheap jokes in lieu of humor.’ These were their own words, and we agree. And while we were talked about so negatively, we are very humbled that the rest of the Greek community at Rutgers University-all 4,000 students- have been so supportive. This is an indication that Greek life is built on principles that extend far and beyond those that are portrayed in the media.”

Last year, The Medium was accused of bias over an April 4 column “What about the good things Hitler did?”  The Medium listed Aaron Marcus as the author of the column, but Marcus, a Jewish student who filed the complaint, didn’t write the column and called it “hurtful” to be identified as the author.

iMediaEthics has written to The Medium asking:

Satire site The Onion apologized Feb. 25 for a “senseless, humorless comment” in a tweet.  The Onion had called 9-year-old actress Quvenzhane Wallis the “c-word.”