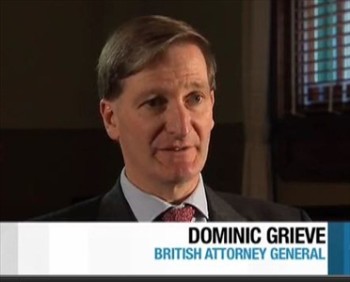 The UK Attorney General, Dominic Grieve, spoke to the UK City University London journalism school Dec. 1 about his taking newspapers to court this year. Grieve’s speech (see here) was titled “Contempt – A Balancing Act: balancing the freedom of the press with the fair administration of justice.”

Grieve opened his speech noting that he wanted to address his”role as Attorney General in the context of the press,” press freedom, “the right to a fair trial” and how all three come into play.  As attorney general, Grieve explained his main role is the “principal legal adviser to the Government,” however, he often acts as “Guardian of the Public Interest.”  As such he has independence from the government, the press, and so forth.  “And it is as Guardian of the Public Interest that I act in cases of contempt – it is this role which requires me to consider carefully the competing interests of press freedom and the fair administration of Justice,” he explained.

For example, he asked attendees to put themselves in the place of a wrongly accused criminal suspect.  If a judge decided an element from that person’s past isn’t relevant or shouldn’t be admitted, then why does the media drudge up details to no purpose?, he asked.

As Grieve explained, contempt of court can happen even unintentionally.  He can look into charges if a media outlet publishes anything in which a byproduct is ” that Justice will be seriously impeded or prejudiced.”  According to Grieve, contempt of court can happen as soon as someone is arrested.  Grieve noted that he was “concerned” about how news reports affect juries and noted how hard it is to un-learn or un-know something, like a detail reported in the papers.

“I have been concerned, even before I was appointed Attorney General, at what I perceived to be the increasing tendency of the press to test the boundaries of what was acceptable over the reporting of criminal cases. At times it appeared to me the press had lost any sense of internal constraint and felt able, indeed entitled, to print what they wished, shielded by the right of ‘freedom of expression’ without any of the concomitant responsibilities,” Grieve said.

Grieve detailed some of the cases he’s looked into:

“The Internet does not provide some form of immunity from prosecution,” Grieve reminded.

Moving forward, Grieve noted that he may give the press “advisory notices” if he thinks they may be on the border of contempt of court. However, he emphasized that a lack of these warnings doesn’t mean the press has “open season.”

We wrote in May when a UK superinjunction barred the press from naming a soccer player alleged to have an affair with Big Brother contestant Imogen Thomas. A Scottish newspaper defied the order and ran a photo of the soccer player rumored to be in question. Later, Parliament member John Hemming named the soccer player under Parliamentary privilege.

While Grieve defended Parliamentary rights, he criticized members who “flout” the law and a judge’s order because they can. Further, he advised journalists to exhibit “caution” in reporting on these named injunction holders, because he said “it is still an open question as to whether something said in Parliament in breach of a court order may be repeated in the press.”