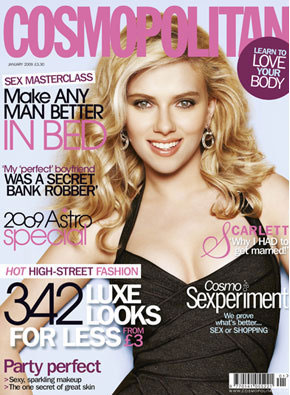 As if misquoting isn’t bad enough, U.K. Cosmopolitan (owned by the Hearst Corporation) decided to fabricate an entire interview with Hollywood star Scarlett Johansson. HollyScoop.com reports: “Scarlett is featured on the cover of Cosmopolitan U.K. this month, and there’s a lengthy interview that goes along with it. Only problem is, Scarlett claims she never spoke to anyone at the magazine, which would make the interview completely made-up!”

The article appears in the January issue and includes ‘quotes’ from Johansson about her relationship with husband Ryan Reynolds.

Johansson’s publicist Marcel Pariseau is threatening to sue. In a statement, she said, “(The article is an) obvious attempt… to gain monetarily by misinforming their readers. (Johansson) has at no point granted U.K. Cosmopolitan an interview, and she has never discussed her personal relationships with the publication.”

U.K. Cosmo has issued an apology to Johansson and released this statement on its website: “Cosmopolitan would like to apologise [sic] to our readers and Scarlett Johansson for inaccuracies in our January issue where we said she talked about her marriage and her relationship with her husband. We now understand Ms Johansson has not commented publicly on her married life and did not do so on this occasion.”

Rachael Gallagher reports for the Press Gazette, “Large parts of the article were taken from an interview that Johansson gave to the US edition of Cosmopolitan, and the quotes about her marriage were apparently added from copy bought from London-based celebrity agency Hot Features.