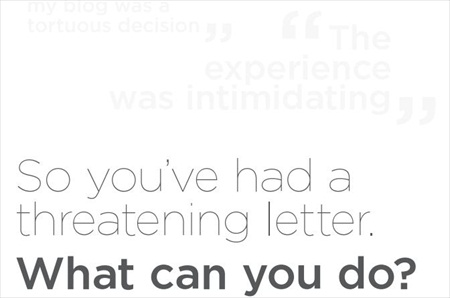 The new guide is titled “So you’ve had a threatening letter.  What can you do?” and advises bloggers and online commenters what to do if faced with a libel charge.

The six-page guide advises specifically on English libel law for both bloggers and online commenters.

Noting that “English libel law is notoriously complicated, costly and skewed in favour of” the claimant, the guide walks bloggers and commenters — anyone who’s posted something about anyone – through the process of a libel claim.

It advises, for example, “if you receive a phone call threatening legal action,” get the claim in writing.

Sense about Science project researcher Rose Wu explained what prompted the guide in an e-mail to StinkyJournalism.

“The publicity following our publications and the cases against Simon Singh, Peter Wilmshurst and others attracted a lot of correspondence from a range of sectors including academics, historians, editors and publishers, consumer groups, documentary film makers and NGOs,” Wu wrote.

“Sense About Science has been contacted about libel threats received by online patient groups and by bloggers who write about medical conditions, consumer safety and scientific research. In response to a lack of information about the effects of the libel laws on these groups, we began documenting these cases and conducted a survey of online forums and writers in September 2010.”

The five groups that worked on the guide with Sense about Science are: Index on Censorship, English PEN, the Media Legal Defence Initiative, the Association of British Science Writers and the World Federation of Science Journalists.

Online Journalism Blog wrote “I’m curious why they haven’t published it as a series of webpages to make it easier to find via search, and to link to – maybe I’m missing something. In the meantime, the PDF is well worth a download.”

“We cannot expect, and the public do not credit, forum discussions with the same standards of fact-checking as national news outlets, but the law currently insists on this. We agree with the service providers that better protection for online discussion is needed in the Government’s new Defamation Bill,” The Guardian quoted Sense about Science’s managing director Tracey Brown as saying.

StinkyJournalism also wrote in April when UK justice secretary Jack Straw announced that he wanted to reform libel law in the UK.  See that post here.

The Guardian provided the link to the petition for Libel Reform here.  Sense about Science project researcher Wu explained that Sense about Science, English PEN and the Index and Censorship created the Libel Reform Campaign in Dec. 2009.  The purpsoe is “to seek major changes to the laws in order to protect free speech and the public interest,” according to Wu.