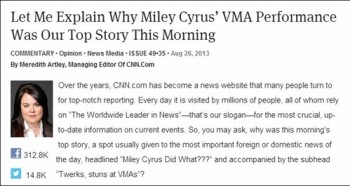 A screenshot from the Onion's story. (Credit: Onion, screenshot)

The UK Independent was hoaxed by The Onion’s story about Miley Cyrus’s performance at the MTV Video Music Awards and the ensuing media reaction, Press Gazette reported.

The Onion story, “Let Me Explain Why Miley Cyrus’ VMA Performance Was Our Top Story This Morning,” carried Artley’s byline. It stated that CNN bumped up coverage of Cyrus over international news as a cheap web traffic ploy. A portion of The Onion story read:

“So, you may ask, why was this morning’s top story, a spot usually given to the most important foreign or domestic news of the day, headlined ‘Miley Cyrus Did What???’ and accompanied by the subhead ‘Twerks, stuns at VMAs’?

“It’s a good question. And the answer is pretty simple. It was an attempt to get you to click on CNN.com so that we could drive up our web traffic, which in turn would allow us to increase our advertising revenue.”

Perhaps close to the mark, The Onion story went on to say that featuring the story was “a disservice to the public” and to “the hundreds of thousands of people dying in Syria, those suffering from the current unrest in Egypt, or, hell, even people who just wanted to read about the 50th anniversary of Martin Luther King’s ‘I Have A Dream’ speech.”

The real Artley has responded to the piece on Twitter:

To clarify, I did not write this. http://t.co/bZZo6JJ5DT But I accept all compliments and deny all accusations. Tx for the page views.

The New Statesman and BBC College of Journalism’s Marc Blank-Settle (tweet below) posted a screenshot detail of the original version of the article, which shows that the Independent story said “Meredith Artley, Managing Editor Of CNN.Com, wrote in The Onion to explain why CNN put Miley as their stop story.”

Late to this (training all day) but @IndyVoices ran as real The Onion spoof on CNN & Miley Cyrus (via @fieldproducer) pic.twitter.com/Id94Kqnv5l
— marc blank-settle (@MarcSettle) August 27, 2013

The story now says that “A piece in The Onion even joked why CNN put Miley as their top story.”

According to Press Gazette, The Independent “has since realised its mistake and amended the article, removing the suggestion that The Onion piece was real.” However, iMediaEthics notes that there is no disclosure of the changes or a correction on The Independent’s story.

iMediaEthics has written to The Independent seeking confirmation of the error and a transparent correction. We’ll update with any response.