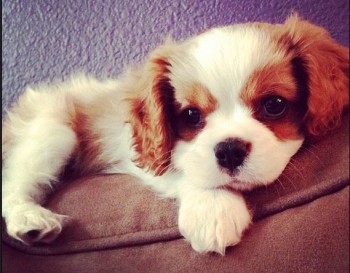 This isn't the dog of Nina Pham, the Daily Dot says, but Mail Online published this and another photo with its coverage of Pham, who is being treated for Ebola, and her dog, Bentley.

The UK Mail used pictures of a random Cavalier King Charles spaniel puppy instead of the actual dog in its reporting on the “Ebola dog.” The dog is the pet of Dallas, Texas nurse Nina Pham who was diagnosed with Ebola over the weekend and cared for the first U.S. Ebola patient, the Daily Dot reports. Pham has a dog, but not the dog shown by the Mail.

The Mail Online’s Oct. 14 story was titled, “Ebola patient Nina Pham’s condition upgraded to ‘good’ as her beloved dog is saved: Pet named Bentley removed from her home by Hazmat team and put in quarantine.”

Instead of euthanizing the dog, like Spanish officials did to the dog of a Spanish nurse who contracted Ebola, Pham’s pup was taken to the vet for treatment.

Two of the photos that the Mail used came from Pham’s Pinterest, according to the credit line, but were not of her dog Bentley, the Daily Dot says. Instead they were “unrelated” and “bouncing around the Web long before Nina Pham was exposed to Ebola.” The photos were on Reddit earlier this month, the Daily Dot reported.’

The Mail‘s story doesn’t appear to feature those photos anymore, but the story was updated this afternoon. It doesn’t carry any correction or clarification as of 5:42 PM EST. See above, a screenshot from the Mail’s article by the Daily Dot.

Coronavirus deaths in Italy & 8 other COVID-19 errors and corrections
Coronavirus errors: More news media corrections include how to disinfect