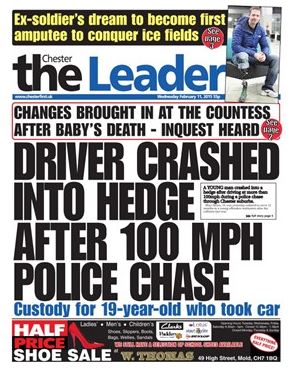 The Chester Leader shouldn’t have identified a child in a report about a crime, especially since there was a court-ordered reporting restriction against identifying the child’s mother, the Independent Press Standards Organisation (IPSO) ruled.

While the story didn’t specifically name the child, “it had plainly identified the child by connection to the named man,” IPSO wrote, which was especially troublesome since the mother “had a reasonable expectation” her child’s privacy would be maintained because of the reporting restriction.

IPSO replaced the UK Press Complaints Commission last September and was created because of Judge Brian Leveson’s Leveson Inquiry and Leveson Report. The PCC was shuttered as part of the fall out over the UK phone-hacking scandal and to “offer the press a clean break from the past,” as iMediaEthics has written. Last month, IPSO started to release rulings on some of the more than 3,000 complaints it has received since its September opening.

IPSO’s most recent ruling focused on a mother who complained about the Chester Leader‘s Oct. 2014 story, which reported on her partner being convicted for undisclosed charges related to placing “the child’s safety at risk.”

The Feb. 10 IPSO report did not further describe what the charges against her partner were.

The problems in the Chester Leader story including naming the complainant’s partner and part of his address and listing “his relationship to the child concerned, and gave an account of the circumstances, including the state in which the child had been found by police.”

The Leader claimed to IPSO that it didn’t know about the restriction against reporting on the child.  It did apologize privately to the child’s mother, promised to keep the story from further publication online or its sister newspapers, and suggested it donate money to charity to rectify the situation, according to IPSO.

IPSO noted that it only reviews complaints against its own code and doesn’t analyze or “enforce reporting restrictions.” But. it did evaluate the mother’s privacy complaint and rule that the newspaper’s actions “constituted an unjustified intrusion into the child’s private life.”

The Leader must publish the IPSO ruling on the same page the original story was published, page 2.  The Press Gazette noted that the PCC “did not tell newspapers where to publish adjudications.”

The Leader is a daily newspaper in Chester, UK, owned by NWN Media Ltd, according to Mondo Times.