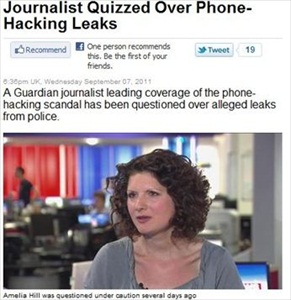 The Guardian announced that its reporter Amelia Hill was questioned by police. (Credit: Sky News, screenshot)

The Guardian’s Amelia Hill was questioned by UK police in relations to “alleged leaks” to the newspaper, Sky News reported.

Hill “has broken a string of exclusives” in reporting on the phone hacking allegations against News of the World.  The Guardian’s spokesperson told Sky News that he had been questioned, and added “On a broader point, journalists would no doubt be concerned if the police sought to criminalise conversations between off-record sources and reporters.”

The Guardian reported on the questioning and cited comments by National Union of Journalists’ general secretary Michelle Stanistreet criticizing the questioning. She is quoted as saying:

“There is a vital journalistic principle at stake here. It is outrageous that an allegation of off-the-record briefings is being treated as a criminal matter.”

Noting that Hill was questioned about leaked information and not about allegations of journalists bribing police officers for information, Stanistreet stated:

“There is a clear distinction between legitimate off-the-record interviews and the illegitimate payment of bribes. In this case the allegation is simply that a Scotland Yard detective is an off-the-record source.”