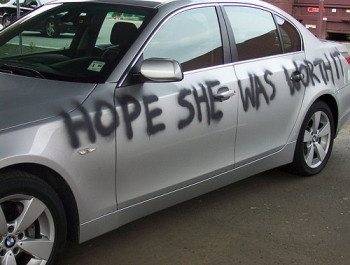 Russell Brand was falsely accused of cheating on his girlfriend by the UK Sun. Photo illustration above unrelated to Russel Brand and UK Sun case. (Credit: Chromoz via Flickr)

The UK Sun made a libel settlement to actor, writer and comedian Russell Brand, the Press Gazette reported.

As iMediaEthics has written, Brand sued over a Nov. 17 front-page article in the Sun that claimed Brand cheated on his girlfriend Jemima Khan. The Sun defended he story.

Brand tweeted April 15 about the payment.

I got some money suing The S*n who lied about me. I am making a donation to the #JFT96 campaign. A tiny piece of justice.

According to the Press Gazette, Brand and the Sun settled the lawsuit and Brand said he was donating the money to the Hillsborough Justice Campaign.

The Hillsbrough tragedy in 1989 was the biggest sporting disaster in the UK. 96 people died.