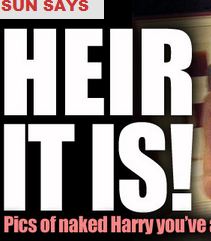 The UK Sun was “the first British publication to defy a request” from the royal family to not publish naked Prince Harry photos, Reuters reported.

As we previously wrote,  the Press Complaints Commission told iMediaEthics that “The Palace have themselves confirmed that they contacted the Press Complaints Commission and used our pre-publication services to pass on their concerns about the potential publication of the photographs to Editors.” The Palace argued the photo invaded Prince Harry’s privacy as it was taken in his hotel room on a “private” trip.

The Sun defended its publication because “This is about the ludicrous situation where a picture can be seen by hundreds of millions of people around the world on the Internet but can’t be seen in the nation’s favorite paper read by eight million people every day…This is about our readers getting involved in the discussion with the man who is third in line to the throne – it’s as simple as that.”

Reuters noted that the Sun’s August 23 edition used a “mocked up photo” of a staff member and an intern posing as Prince Harry.