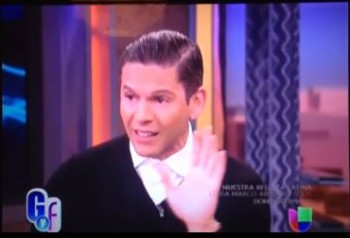 A screenshot from the segment where Rodner Figueroa said Obama "looks like she's part of the cast of 'Planet of Apes.'" (Credit: Univision/HuffPost, screenshot)

Fired Univsion host Rodner Figueroa wrote an apology letter to the First Lady for saying on air that Michelle Obama “looks like she’s part of the cast of ‘Planet of Apes.'”

His offensive comments that resulted in Figuero’s firing were made during a segment “in which the hosts were commenting on a viral video that shows a makeup artist transforming himself into different celebrities, including Michelle Obama,” the Associated Press reported. “The show aired live on the East Coast and was edited for the West Coast,” the Huffington Post wrote.

Has Figuero learned anything? His letter, while stating how sorry he feels, still blames Univision and an artist for his error. Figuero claimed his now former employer leaked information about him and never contacted him to say he was fired or ask for his “side of the story.” He wrote:

“I was notified verbally in a phone call by a Univision executive that, because of a complaint received from your office, my employment was being terminated. In an attempt to what I believe was a move to damage my career, Univision leaked this information to the media and I have been condemned for my comments in social networks and the media. I never received an official written notice of termination or an opportunity to clear the situation and provide my side of the story.”

Figuero also blames a unnamed artist for his “depiction” of the First Lady as the cause of his racist comment. “I would like to explain that my remark was not directed at you,” he wrote,”but at the result of an artist’s depiction of you that I found wasn’t accurate. The entire video clip in context corroborates this.”

In addition to firing Figueroa, Univision also “pulled references to him from their websites,” Mediaite reported.

FIgueroa issued an “open letter” apologizing for the comments and claimed “I’m not racist,” the Daily Mail reported. The full letter, in Spanish, is published on LatinWe.com, and a translated version is available on Latin Times‘ website.

“I ask for forgiveness, because there is no excuse for a professional like me to make those types of comments that can be interpreted as offensive and racist in a volatile moment that we live in our country,” Figueroa is quoted as saying. “I take full responsibility for the lack of judgement in my part, but I can’t accept that I am being called a racist, being fired for that reason and being humiliated by Univision after working there for 17 years.”

Figueroa added that he “voted twice for your husband Barack Obama.”

According to the AP, Figueroa had been with Univison for 17 years.

“Univision reaches 94 million households in the United States. It is the largest Spanish language broadcaster in the U.S., and the fifth largest television network,” CNN reported.