US Marines Say Philadelphia Mag's Source An Exaggerator, Not a Faker

US Marines Say Philadelphia Mag’s Source An Exaggerator, Not a Faker 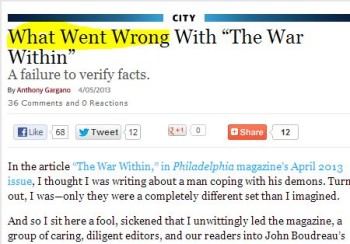 Anthony Gargano, who wrote the article for Philadelphia, apologized for his story based on a lying source's account. (Credit: Philadelphia magazine, screenshot, highlight added)

Major Shawn Haney, a public affairs officer for the U.S. Marine Corps, has helped reveal the extent to which Philadelphia magazine was hoaxed by a lying source.

As iMediaEthics has written, Philadelphia issued an incredible apology this month after finding out a source, John Boudreau, duped them with a phony story about his Marine past.

Haney confirmed to iMediaEthics that Philadelphia magazine did reach out last week to fact check Boudreau’s identity, after the magazine had learned it had been tricked.  While there were “several name matches,” the Marines were still sorting through records to see if the person Philadelphia magazine interviewed is in their system earlier this week.  Because “older records are not digitized,” the Marines have to “fulfill requests physically,” Haney said.

“This doesn’t mean because they have his name that he was a Marine,” Haney cautioned. “It could be that he was in training,” for example.

In Haney’s world, people wrongly identifying their military experience are “either fakers where they never were a Marine, or exaggerators.”

Using Haney’s yardstick, then, Boudreau was an exaggerator.  Haney told iMediaEthics earlier this week that she would let us know when she lets Philadelphia magazine know if the John Boudreau the magazine interviewed has any military past, and if so, what that experience is.

We heard from Haney this afternoon.

According to an email citing Boudreau’s “Official Military Personnel File,” Boudreau was in the Marine Corps Reserves but had “no combat history. No deployment history. No awards indicated.”

Boudreau entered the reserves in 1986 and was discharged in 1989.  Haney wrote in her email to iMediaEthics that the “reason for and type of discharge are not releasable per the Privacy Act.”

According to Haney, there aren’t any criminal laws against lying about a military past unless there is material gain.  She said it’s very important for media to pick up the phone and fact check when someone claims to have a military background.

Over the weekend, iMediaEthics also heard from Philadelphia magazine editor Tom McGrath in response to our earlier inquiry about this incident.

“Our fact checking procedures are generally very thorough, so this story was the exception, not the rule,” McGrath told iMediaEthics by email.  “That said, we’re reviewing our practices to make sure nothing like this can happen again.”

McGrath added that the magazine is fact checking with the Marines to see if Boudreau was a Marine.  “We should have official word on this in the next few days, at which point we’ll update our post (as well as include that information in our print retraction).” As of this story’s publication, Philadelphia  hasn’t updated the story to reflect Boudreau’s lack of combat history.

According to McGrath, the magazine doesn’t intend to print an “itemized list of lies/inaccuracies,” because “the gist of the story” was “fundamentally untrue.”

It shouldn’t be missed in reading the email that instead of being a highly trained sniper who “killed scores of people during his tours,” Boudreau never was deployed and certainly never served in the Middle East, as he claimed with his derring-do.

US Marines Say Philadelphia Mag’s Source An Exaggerator, Not a Faker