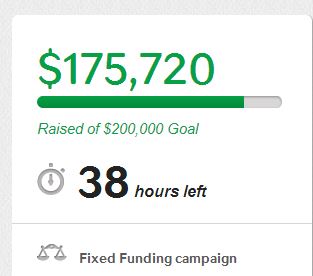 Gawker started a crowd-sourcing campaign to raise the money to buy the video. (Credit: IndieGogo, screenshot)

Toronto Mayor Rob Ford was allegedly caught on camera smoking crack cocaine. And the person who shot the video showing this allegation tried to get both Gawker, a New York City-based “gossip” blog, and The Toronto Star to pay big bucks to have the proof.

Instead of doing that, both outlets went to press, describing what they saw, what the offer was, and how reporters found out about the video.  While both rejected the offer, Gawker started a crowd-funding campaign — which ends Monday — to raise the money for the video.

Ford was basically silent for a week about the video and allegations of drug use, but finally commented on the video in a May 24 speech, saying “I do not use crack cocaine, nor am I an addict of crack cocaine.” The Toronto Star noted that Ford “refused to take questions from reporters” after his comments.

Outside of the political and legal questions, this case is full of media ethics elements: How did the reporters verify who they saw was Ford? How did Gawker and The Star handle the checkbook journalism proposition? Is it just checkbook journalism-lite if the crowd-sourcing fund raises enough money to buy the video for Gawker?

Gawker broke the story about the video, what it allegedly shows, and how Gawker both found out about it and saw it.  While Gawker said it couldn’t pay the cash (not for ethical reasons, but because it was too much money), the blog reported on the video solicitation.  Its blogpost on May 16 at 8:28 p.m. reported, “Last week, we got a tip from someone claiming to have a videotape of Ford smoking crack. Would we like to buy it?”

Gawker’s John Cook said he went to Toronto and after various complications including a dead battery and failed attempts to connect with the shady sources of the video, he eventually met up with the tipster and the video owner.  Cook said he saw the video of what he said showed Ford smoking what appears to be crack cocaine and that he verified what he saw by “looking at photographs of Rob Ford” beforehand.  Cook wrote:

“The trouble is, the owner wants money. More money than I am willing to pay. The tipster has already reached out to one other news outlet, a Canadian organization that he refused to name, which offered $40,000. The owner rejected that. He thinks he can get six figures. It’s unlikely he’s going to get six figures.”

Cook’s post noted that Gawker couldn’t pull together the money, but would be willing to work with a partner in order to bring the video to light.  He added that he reached out to CNN about the story, but a CNN Canada reporter contacted a Ford source, which he suggested could have put the video at risk.

According to Cook, after publication of the Gawker post on the video, “a gentleman with a hotmail.com email address purporting to be Ford’s attorney” Dennis Morris contacted Gawker threatening legal action.

Toronto Star Says it Saw the Video Too, but is it still an exclusive?

Within hours the Toronto Star reported that  two of its reporters watched the video in the backseat of a car and were offered the video for “six figures.” The sellers, according to the Star, are “a group of Somali men involved in the drug trade.”  The Star’s May 16 story about its two reporters viewing the video was oddly labeled an “exclusive” even though Gawker had already broken the story. The Star offered information on the video:

“Two Toronto Star reporters have viewed the video three times. It appears to show Ford in a room, sitting in a chair, wearing a white shirt, top buttons open, inhaling from what appears to be a glass crack pipe. Ford is incoherent, trading jibes with an off-camera speaker who goads the clearly impaired mayor by raising topics including Liberal Leader Justin Trudeau and the Don Bosco high school football team Ford coaches.”

The Toronto Star noted it couldn’t “verify the authenticity of the video” which was “shot during the past winter.”  Further, the Star said it the mayor’s office wouldn’t comment, but that Ford’s lawyer Morris said of the video, “How can you indicate what the person is actually doing or smoking?”

Like Gawker, the Star said its reporters “studied numerous city-hall-related videos of Ford and, to the best of the reporters’ abilities, they separately concluded the man in the video was Ford.” Other similarities included that the Star said it could have bought the video, but that it didn’t, and that the people selling the video wanted to leave Toronto.

The Star indicated that it found out about the video many weeks ago, as it said it heard about the video after its March 26 story on accusations of alcohol abuse against Ford.

(iMediaEthics wrote last month about that report on Ford, accusing the mayor of alcohol abuse and of having been kicked out of a military ball because he was intoxicated.  The Star’s story was based on anonymous sources, but Toronto Star public editor Kathy English reviewed the reporting and said it met “the Star’s standards on the use of unnamed sources” and that the story was reported “in a responsible manner.”  At the time, Ford said the article was “an outright lie,” but when iMediaEthics asked Ford’s press secretary if Ford would sue for libel, we were told “no further comment.”)

After Gawker broke the story, Robyn Doolittle, the reporter who shared a byline on the Toronto Star’s video story and was one of the reporters to see the video, tweeted about the Ford video and how the Star used the term “exclusive” even though the story was broken by Gawker. See below a selection of her tweets:

Myself and Kevin Donovan have viewed the video of Mayor Rob Ford that is the subject of the Gawker piece. Read the Toronto Star tomorrow

@chapattak Gawker is great. Big fan. They broke it. Ours is still exclusive. We have other reporting. We have more detail about the contents
— robyndoolittle (@robyndoolittle) May 17, 2013

@lessjaimeleigh @chapattak well – we can disagree and you are of course allowed to think we’re wrong with the exclusive label.

The Star’s story was obviously prompted by Gawker. We were still trying to obtain the tape. Gawker’s story meant that was over. So we went
— robyndoolittle (@robyndoolittle) May 18, 2013

That @johnjcook saw the same video helped us tremendously and got this important story out to the public. Great day for journalism.

Gawker Crowd-Sourcing the $ to Buy the Video

The day after publication, May 17, Gawker announced it set up a crowd-sourcing fund to put together $200,000 to buy the tape.  Through crowd-sourcing website Indiegogo, Gawker said the people who have the video said they’d turn it over for the $200,000 to “get out of Toronto and set up in a new town.”

Gawker noted that there’s a possibility “this whole thing goes south,” so in case the deal doesn’t pan out, Gawker said it would give the money to charity.  As of May 26, Gawker had more than $175,000.

However, Gawker noted May 23 that it doubted it would be able to get the video because it hadn’t been able to get in touch with the video owners.  “Our confidence that we can consummate this transaction has diminished,” Gawker wrote on its Indiegogo page. However, Gawker reminded that if it does get the $200,000 donated, it will still give the money “to a Canadian nonprofit that addresses substance abuse issues.”

In a May 21 column, Toronto Star columnist Rosie DiManno called for the Star‘s publisher to shell out the money for the video because otherwise, she argued, “the purported evidence … will disappear — locked in a vault, burned, erased.” (iMediaEthics wrote about DiManno back in February when her Jan. 18 column on a rape trial garnered a lot of attentionfor the sensational lede, “She lost a womb but gained a penis.”  DiManno wouldn’t comment to iMediaEthics about her column because we’re an online news outlet, telling us that “If it’s not in print – newsprint – it’s not real.”)

DiManno, who referred to the video story as a “co-scoop” for Gawker and The Toronto Star, argued that this was a good reason to use checkbook journalism, and compared it to when “police pay snitches for information.”

“There are times, rare instances, where the end justifies the means,” DiManno wrote “Further, the Star would be doing so up front, in the open, transparently.”

She noted that there’s still a chance the video could show a “doppelganger, or a cleverly Photoshopped version of the mayor,” but called for the Star to put aside ethical concerns.  “I want to see the video,” DiManno wrote. “I want its authenticity tested. I want the purported evidence protected.  Ethics shmethics, boss.”

On the other hand, several other news sites said the public doesn’t need to see the video or spend the money.

“Not only does the campaign attempt to dress up old-fashioned checkbook journalism as some noble equalizer of valuable information, but it also drags the good-will principles of crowd-funding even deeper into the mud than they already are.”

“This video of the mayor of a major North American city hitting the pipe, if it indeed exists, will be seen. It’s a mathematical certainty. And that’s true whether Gawker pays $200,000 for it, or whether its creators upload it to YouTube for free. There is something about being in the possession of high-interest material that creates a need to share it.”

National Post agreed with International Business Times that the media (and the public, through crowd-funding) shouldn’t pay for the video:

“And not just because of the utter offensiveness of publicly rewarding a pair of drug players with a rich reward for having the savvy to hit “record” on their cell phone. (Though surely, that is enough.) At this point, Toronto really doesn’t need to see the video. The mayor, at present, has only two choices — either own up to the allegations and beg for absolution, or deny the claims  in absolute terms and declare the video a complete hoax. Whether the actual clip in question surfaces won’t make one bit of difference.”

Likewise, The Globe and Mail questioned “what will be the long-term effect of abandoning these principles” advising against checkbook journalism and relating it to the UK phone hacking scandal.

“We’ve seen exactly where widespread source-buying leads: It leads to ruthless competition among privacy-invading freelance paparazzi; it leads to even more unscrupulous competition among private investigators to acquire personal information from the phones and computers of public figures; it leads, in short, directly to the Leveson Inquiry, the judicial inquiry into British media ethics and practices after the News of the World phone-hacking scandal.”