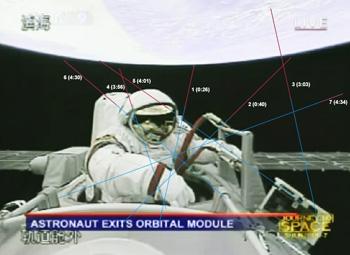 Ian O'Neill, Astroengine.com, did an analysis of the Shenzhou VII spacewalk video that bloggers have questioned. He wrote,"If you have a look at the image above, I decided to trace the paths taken by our 'bubbles' in an attempt to see where they originated." Click image to read more.

Controversy about a Chinese space mission video has gone out of this world.  Epoch Times presents arguments that support that it’s fake, whereas,  Astroengine.com. has declared it legit.  Both sites have done an impressive, detailed analysis .

Dr. Zheng said, “In addition to the air bubble problem pointed out by bloggers, they also includes technical pre-launch concerns, a lack of atmosphere around the Earth, abrupt large scale changes in the clouds, and no background noise heard in the space-talk.”

Shi Yu asked Dr. Zheng about the absence of an atmosphere around the earth. He answered, “Let us take a look at the photo (see photo above) in the Xinhua news report or the so-called live broadcast video. The edge of the earth near the top of the Shenzhou VII shuttle was almost smooth, and there was no blue atmosphere around it. Similar to the ISS, Shenzhou VII also maintained a close to circular orbit, with both flying at a distance of about 340 kilometers from the earth’s surface.”

In contrast, Ian O’Neill, Astroengine.com, concludes, after doing a careful review of the blogger challenges, that the space video is fine.  He wrote, “So, we are presented with two options. Either, China went into space and performed a flawless 15-minute EVA, or the mother of all space hoaxes has just been carried out. So which one do you think it is? I’m betting that China did indeed get into space. The ‘bubbles’ are in fact space debris, the reflection of “studio lights” is in fact a reflection of some equipment on the Shenzhou-7 hull, and everything else is simply hard to believe.”