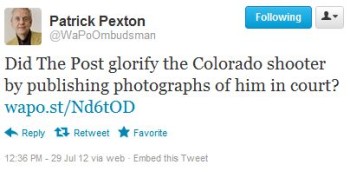 Pexton defended the publication of the pictures because outside of a school photo, they were “newsworthy” as “the first authorized and verifiable” images and as supportive of his “conduct in the courtroom” as “odd.”

“The readers may be right that publicity could inspire copycats or give the alleged shooter the notoriety he may have been seeking. But it’s just as likely the photographs will have no effect… It may be that Holmes is a cold-blooded killer, a troubled or insane young man hell-bent on notoriety. But he is also a human being, a man of flesh and blood like the rest of us, and the public has a right and duty to see him for who he is.”