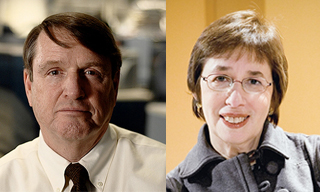 Linda Greenhouse, the "sacrificial lamb" on right, Leonard Downie, Washington Post editor, on left. He felt strongly that Greenhouse ran afoul of journalism ethics. when she marched as a private citizen in the 1989 pro-abortion rights rally.

Radar Magazine reported that when New York Times reporter Linda Greenhouse marched in 1989 to support abortion rights in Washington D.C. others from the Times marched too. The difference was, according to Greenhouse, they had gotten press passes. She went with three friends.

A question of the public perception of bias was raised. After all, this was a Supreme Court issue and Greenhouse was the Times reporter who covered the Supreme Court. Leonard Downie, at the Washington Post, according to Greenhouse, raised a unjustified fuss. Greenhouse told Radar, “Well, Max [Frankel, her Times editor] was not going to be ‘ out-ethiced ‘ by Len Downie. And so he said, ‘ Well, this is terrible, this violates all kinds of rules.’ Which, actually, it didn’t. So he came down on me. He made Howell call me in and read me some kind of riot act.”

She continued, “You know, I just realized I was being thrown overboard as a sacrificial lamb for the greater good of journalistic ethics. So I just took it with a grain of salt. [Asked by FCP about this account, Frankel replied: ‘ I don’t remember sacrificing any lamb—just trying to protect us from appearing partial about issues we cover. Linda served the Times brilliantly and I was then and have always been her No. 1 fan.’] “