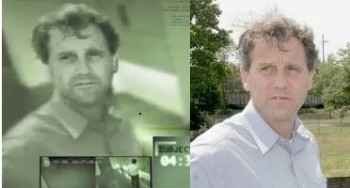 See the advertisement's picture on the left, and the Associated Press's photo on the right. (Credit: The Hill.com)

According to Talking Points Memo, Ohio Democrats allege that the chamber of Commerce’s “attack ad” features an AP photo doctored to show Brown unshaven. The website for the Ohio Democratic Party (see here) shows a side-by-side comparison of the AP photo and a screenshot from the advertisement.  It appears that they are the same photo, with the exception of the advertisement adding scruff to Brown’s face.

TheHill.com notes that the Associated Press photo was taken “in July 2006 outside a steel mill in Middletown, Ohio.”  Besides the added facial hair, the advertisement photo features a different background and resembles “surveillance-camera footage.”

According to Cincinnati.com, the party issued a press release commenting that ““Apparently not content with simply distorting Sherrod’s record, they’ve even taken  to distorting his picture.”  The party also claimed that the advertisement contains fake claims.

In response to criticism, a spokesperson for the Chamber of Commerce, J.P. Fielder, is quoted by Cincinnati.com as saying  “I don’t have an answer to where the photo was changed, or if it was.” Fielder claimed that Brown is “running away from his record.”

We wrote in September when Schultz, at the time a columnist for the Cleveland Plain Dealer, issued an apology for videotaping but not reporting on Josh Mandel, her husband’s opponent in the race.

She resigned from the Plain Dealer later that month because of the conflict of interest her marraige to Brown, who is seeking re-election, raises, as we wrote.

We are writing to the Associated Press and the Chamber of Commerce  for comment. We will update with any response.