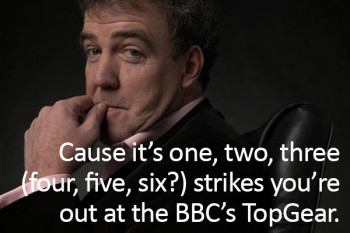 The BBC suspended Jeremy Clarkson yesterday because of a “fracas with a BBC producer,” a BBC statement announced.

Clarkson has been controversial for the BBC, as iMediaEthics has reported. Last year, the BBC gave him a “final warning” after saying the n-word.

The BBC is investigating this latest incident and “no one else has been suspended,” the statement reads, adding that Clarkson’s car show Top Gear won’t be aired this week. “The BBC will be making no further comment at this time,” the BBC said in its March 10 statement.

Clarkson, however, has tweeted, and re-tweeted a fan’s post about Top Gear episodes being pulled. The Guardian noted he “brushed off” the suspension, pointing to an online petition for his reinstatement that has more than 500,000 signatures.

Sorry Ed. It seems I knocked your “I’m a human” piece down the news agenda.

@JeremyClarkson how can @BBC not show the remaining episodes of Top Gear, cant this be resolved without making the fans suffer
— Nathan Badcock (@nathbadco) March 10, 2015

In a news story, the BBC reported that it will likely “scrap the remainder of the current Top Gear TV series” because of the incident.

BBC special correspondent Lucy Manning said according to the BBC, Clarkson is accused of hitting a producer last week, which the BBC just found out about Monday. “The next two episodes of Top Gear will not be broadcast and it’s understood that a third programme, the final of the series, is unlikely to be transmitted,” she is quoted as saying.

The Mirror reported, based on an anonymous source, that Clarkson hit producer Oisin Tymon because he didn’t get his dinner when he wanted.

iMediaEthics wrote to the BBC to ask about the status of the Top Gear series and for confirmation Tymon was hit by Clarkson. The BBC just sent its earlier statement confirming Clarkson’s suspension.

In 2011, more than 21,000 complaints were filed with the BBC after Clarkson called on air for public sector workers on strike to be shot.

In 2012, viewers complained after Clarkson said a Japanese car looked like “people with growths on their faces.”

“You know sometimes you meet someone and they have got a growth on their face and it is bigger than their face … one of those really ugly things,” Clarkson said.

UK broadcast regulator OfCom ruled against Clarkson in 2014 for “deliberately” using the racist term “slope” to refer to an Asian man.
jey l
Also in 2014, the BBC investigated Clarkson’s show Top Gear for racism but decided to let it continue being broadcast.