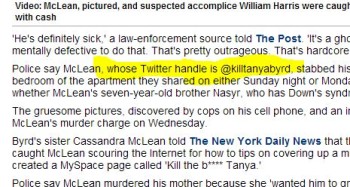 The UK Daily Mail reported that Bashid Mclean's Twitter account is @killtanyabyrd. But, the account looks to be a fake. (Credit: Daily Mail, screenshot, highlight added)

Was the UK Daily Mail hoaxed by a fake Twitter account purporting to be Bashid Mclean, the New York man who is accused of murdering and dismembering his mother, Tanya Byrd?

In a story about a photo Mclean reportedly took of himself holding his mother’s severed head, The Mail reported that Mclean’s “Twitter handle is @killtanyabyrd.” But is this account a hoax?  The New York Police Department, which told iMediaEthics that it’s “aware of” the @killtanyabyrd account, didn’t respond so far to our request seeking confirmation that the account is a phony.

But, if you check out that Twitter account, two red flags appear that suggest that it’s a hoax.

First, the account has posted no tweets, is following no one and only has four followers (as of March 5, 12:33 PM ET).

The Daily Mail says this is Bashid Mclean’s Twitter account, but it’s awfully empty. As of March 4, two days after the Mail’s story was first published, the account only had 4 followers. (Credit: Twitter, screenshot)

That is the same misspelling of Mclean’s name that the Daily Mail used throughout its article.  But, as the NYPD confirmed with iMediaEthics by email and phone, his name is spelled: Bashid Mclean. The NYPD said the l in Mclean is lower-cased, so we are using the spelling Bashid Mclean.

iMediaEthics suspects the Daily Mail got the botched spelling from the New York Post, which as we wrote earlier this week misspelled Mclean’s first name in a story and photo caption related to Mclean.

iMediaEthics notified Jamie Schram, who wrote the story for the New York Post, of the error on March 2. But, Schram hasn’t responded to our inquiry and the New York Post hasn’t corrected the typo.

iMediaEthics has also written to the Daily Mail asking:

iMediaEthics wrote March 3 about the gruesome photo, which was first published by the New York Daily News with a censor over what it and the police said was Byrd’s head. The NYPD told iMediaEthics at the time “the photo…was not released to the media by the NYPD.”