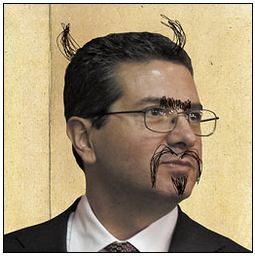 The lawsuit claims that the City Paper “libeled and defamed [Snyder] in a series of articles dating to 2009” and asks for “$2 million in general damages plus unspecified punitive damages and court costs.”

According to the Washington Post, Snyder’s spokesperson, Tony Wyllie, stated that “any damages won would be contributed to a fund for the homeless.”

One article in question is Nov. 19’s “The Cranky Fan’s Guide to Dan Snyder” by staff writer Dave McKenna (see here).  McKenna’s article comments that Snyder’s wife, Tanya Snyder, “is out selling the transformation” of her husband.

Further, the City Paper has been criticized for its cover image, a doctored photo that pictured Snyder with “scribbled-on horns and facial hair” that Sydner considers racist. (See the image here.)

According to the Post, “Snyder’s public relations representatives also released a statement from the associate dean of the Simon Wiesenthal Center in Los Angeles.”  Snyder’s representatives reportedly asked for the center to its comment.  The center’s Rabbi Abraham Cooper stated that it is

“inappropriate and unacceptable when a symbol like this – associated with virulent anti-Semitism going back to the Middle Ages, deployed by the genocidal Nazi regime, by Soviet propagandists and even in 2011 by those who still seek to demonize Jews today – is used on the front cover of a publication in our Nation’s Capital against a member of the Jewish community.”

City Paper’s publisher, Amy Austin, backed the article, the Washington Post reported. “We don’t believe there’s anything wrong with what we published. The facts are correct.”

Austin explained to the Post that the image’s purpose was to “suggest a childlike defacing of a Snyder photo – something an angry fan might do.” In a statement on City Paper’s website, Austin went on to assert “there plainly was no anti-Semitic caricature of your client with horns.”   Rather, it was “a classic satire depicted in myriad forms of media.”  Austin stated:

“We certainly would hope that your client is not attempting to exploit contrived claims of anti-Semitism as a pressure tactic against a media portrayal that he finds unflattering.”

And, in a separate Feb. 2 “City Desk” blog post, City Paper managing editor Mike Madden commented on the charges of anti-Semitism.  “For the record: The story didn’t mention Snyder’s religion at all.  And the illustration is meant to resemble the type of scribbling that teenagers everywhere have been using to deface photos for years. The image of Snyder doesn’t look like an ‘anti-Semitic caricature’ — it looks like a devil.

“But we at City Paper take accusations of anti-Semitism seriously — in part because many of us are Jewish, including staffers who edited the story and designed the cover.  So let us know, Mr. Snyder, when you want to fight the real anti-Semites,” Madden concluded.

Regarding the column, Austin explained “The Column plainly is a tongue-in-cheek opinion piece expressing fans’ frustration with your client’s ownership of the Redskins. This is quintessential First Amendment-protected speech.”

Austin elaborated in her statement on the lawsuit.  She claimed that the City Paper wasn’t contacted directly by Snyder regarding the lawsuit threat.  However, the Redskins’ attorney, David Donovan, “complained about that article and others in a letter to Atalaya Capital Management, an investment company that owns Creative Loafing, Inc., the parent company of Washington City Paper.”

In that Nov. 24 letter to Atalaya (which City Paper posted on its website here) “on behalf of Dan Snyder,” Donovan called the City Paper’s coverage of Snyder “an ongoing campaign by one of your newspapers to smear his personal and business reputation, which effort was capped by the paper’s cover story this week.”

“The paper’s depiction on its cover of Mr. Snyder with horns was anti-Semitic, adding to the patently malicious crusade one of your columnists has pursued against him (and now his wife) for years, but particularly since your company purchased the City Paper out of bankruptcy in August 2009,” Donovan wrote.

Donovan went on to claim that there were “many blatantly false, misleading or simply irrelevant items” and labeled it a “smear campaign against Mr. Snyder.”

“We are, as you might have inferred, evaluating all of our options, including litigation. Mr. Snyder has more than sufficient means to protect his reputation and defend himself and his wife against your paper’s concerted attempt at character assassination.  We presume that defending such litigation would not be a rational strategy for an investment fund such as yours.  Indeed, the cost of litigation would presumably quickly outstrip the asset value of the Washington City Paper.”

Countering Donovan’s claims, City Paper’s Austin offered the newspaper’s side of the story in her statement on City Paper’s website:

“We reviewed the complaints carefully, as we would with a suggestion by anyone that we had gotten something wrong. We believe we have the facts right.  Nevertheless, we have offered Snyder the opportunity to publish a guest column responding to the article, we proposed that he meet with our editor to discuss his concerns, and we invited him to provide information demonstrating that what we published was false.

“If we were to conclude we got something wrong, we would correct it. We also emphatically reject the suggestion that we stop reporting on Snyder or that we pull McKenna, who has written for City Paper since 1986, from reporting on Snyder and/or the Redskins.”

“The only response to our offer was a letter earlier this week from Patty Glaser, a prominent Hollywood lawyer, demanding that certain documents be retained for litigation.”

Austin went on to say that “It’s extremely unfortunate that Snyder believes that it is appropriate to threaten City Paper with litigation because he objects to our coverage.

“As a 30-year old newspaper and vibrant website committed to both in-depth news reporting and full-throated commentary, we do not believe that using the court system to stifle or chill free speech is ever appropriate. In this case, it’s especially shabby: As a well known public figure, Snyder has more than ample ability and resources to respond to coverage he does not like, including through his significant public relations apparatus.

“Lest there be any doubt, we have offered him a forum to do so in our pages, and that invitation stands. Should he elect to actually file a lawsuit, we have directed our counsel to defend the case vigorously.”

In a Dec.7 letter to Donovan (see here), Atalaya attorney Curtis B. Krasik clarified that “Atalaya has no direct involvement in the management of the Washington City Paper, let alone any of its content, and until receiving your letter Atalaya had no direct or prior knowledge of the editorials whatsoever referenced in your letter.”

Further, Krasik wrote to Donovan that his “November 24 letter is replete with baseless mischaracterizations of the Washington City Paper column to which you principally refer….and well as demonstrably false statements of fact and law.”

Most recently, a Jan. 2 letter from Patricia Glaser to Krasik (see here) let Atalaya, the City Paper and McKenna know “that we intend to request, among other documents, all documents and communications, both electronic and hard copy, in their possession, custody or control, including emails sent from and received on personal and business accounts. which in any way pertain or relate to” Dan Snyder and the column, among other topics.

iMediaEthics is writing both sides of the dispute and will post any response.