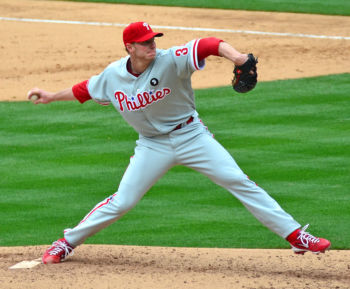 How soon after the sudden tragic death of a well-known person is it appropriate to discuss the grisly details? Boston sports radio host Michael Felger did not wait long enough, it seems, as he mocked former baseball pitcher Roy Halladay, who died when the plane he was flying crashed this week. “Splat, you’re dead with two kids,” Felger remarked.

In his 98.5 The Sports Hub program on Nov. 8, Felger called Halladay a “moron” and a “jackass,” according to the sports site Awful Announcing, which posted an 11-minute clip of Felger’s comments.

Felger also slammed people who were upset over the pitcher’s death and called Halladay “cavalier about life” especially because he had a family. Further, Felger said Halladay “got what he deserved.”

He said Halladay is “the bad guy” for flying “a little toy plane,” adding, “As a 40-year-old grown-ass man, you’re still doing that, to the point where you’ve got to get in planes and race cars and all that crap? I’m sorry, dude, you’re on your own. I’ve got no sympathy for you.”

The Boston Herald, where Felger previously worked, contacted  him after his controversial comments, but told the newspaper that his boss “doesn’t want me to say anything.” iMediaEthics has contacted the station to ask how many complaints it has received, for confirmation that management there has told Felger not to comment, and for the station’s response to the critics of the show’s comments.

Yesterday afternoon, Felger apologized on his show, saying “I feel bad about what I said and how I conducted myself. To say it was over the top and insensitive is really stating the obvious.”

Below, see a collection of tweets about Felger’s remarks.

Felger’s show, Felger and Mazz, is “one of the most popular radio shows in sports-mad Boston, where pundits’ comments are often delivered in an abrasive manner,” according to the Washington Post. “A former sportswriter for the Boston Herald, Felger has offered numerous attention-grabbing opinions over the past few years, including repeated assertions that athletes should not miss games to attend the births of their children,” the Post added.